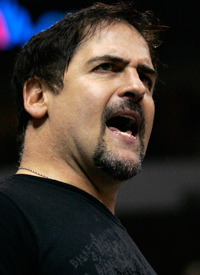 With Dallas Mavericks owner Mark Cuban facing civil insider-trading charges (PDF) from the SEC, we got to wondering what it takes for securities fraud to become a crime.

The short answer: It depends on the prosecutor.

The SEC does not have authority to bring criminal charges -- it can only refer allegations to law enforcement. Then prosecutors decide whether to pursue a criminal case.

Prosecutors can be swayed by how egregious the allegations are or how much money is involved.

And they are more likely to target people who should have known they were breaking the law. People like Martha Stewart: a former stock broker, director of the New York Stock Exchange and one-time resident of the Alderson Federal Prison Camp for women. (In Stewart's 2004 insider-trading criminal case, a judge dismissed securities-fraud charges against her, but a jury convicted her of obstruction of justice.)

Because of its high-profile status, Stewart's case is precisely the type that the SEC refers for criminal prosecution. "The SEC pushes criminal penalties if they think it'll get attention" and serve as a deterrent to others, Robert Brunig, the former head of the SEC's Forth Worth trial unit told us.

According to this year's SEC Enforcement Manual (PDF), officials also consider whether a criminal case will "provide additional meaningful protection to investors."

Occasionally, the SEC's civil case will be the stepping stone to a criminal one. While testifying at trial a civil defendant might further implicate himself, allowing the SEC to "turn him over on a silver platter to prosecutors," Brunig said.

But silver platters are few and far between in the federal government. The U.S. Justice Department pursued only 24 criminal insider-trading cases in 2006, probably less than a quarter of the civil cases brought by the SEC that year, according to John Coffee, an expert in securities law and a professor at Columbia University Law School .

"It's unlikely the Department of Justice will go to the time and expense for someone who's a fairly low-level flunky," Coffee said.

Of course, Cuban is a billionaire -- not a low-level flunky. But it's still questionable whether the Justice Department will bring criminal charges against him.

Speaking by phone from the Maverick's stadium in June 2004, Cuban allegedly "flew off the handle" when the chief executive of Mamma.com delivered the news.

In a post on his Web site, blog maverick, Cuban accused the SEC of being "infected by the misconduct" of its staff.

People close to Cuban have provided adversarial e-mails that an SEC lawyer sent Cuban. In one e-mail, the lawyer criticized Cuban for "smearing the good name of a patriot like President Bush," because of Cuban's reported involvement with a controversial film about the Sept. 11 attacks, according to the Dallas Morning News.

SEC officials said the e-mail was irrelevant because the lawyer didn't work on the Cuban investigation.

To prove its case, the SEC has to show that Cuban breached his "duty of confidence" to Mamma.com, said Coffee of Columbia University. But Cuban was not an officer or employee at Mamma.com, making it difficult to prove he had a duty to the company.

"This is not a slam-dunk case," Coffee told us.

The fact that the case boils down to a he-said, she-said dispute between Cuban and the company's chief executive is "likely to deter prosecutors" from pursuing a criminal case.

But Brunig, the former SEC attorney, said $750,000 is a "decent amount" and Cuban's "prominence makes a criminal case more likely."

An SEC spokesman declined to discuss whether the commission will refer the case to the U.S. Attorney's office.

The commission, meanwhile, is looking for Cuban to pay, with interest, what he avoided losing and a separate penalty that could reach as high as $2.2 million.