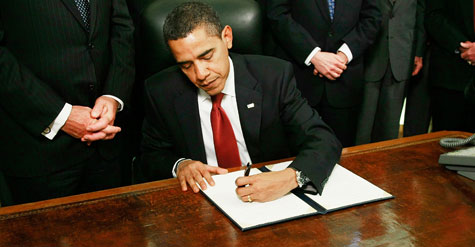 For anyone wondering how one of President Obama’s signature pledges seemed to unravel between Monday and Friday, here’s a look at the week that was.

Savvy readers of The New York Times may have noticed a letter to the editor in Tuesday’s edition, co-signed by three city council members including the speaker, the chairman of the Public Safety Committee and the chairwoman of the Lower Manhattan Redevelopment Committee. One month after the Christmas Day terror plot aboard a Detroit-bound flight, all three city officials came out against trials for five alleged Sept. 11 conspirators in Manhattan. The officials’ letter was in response to a speculative article, which ran a week earlier, about possibilities for moving the trial 800 yards out of Manhattan, to nearby Governors Island.

On Wednesday, Mayor Michael Bloomberg publicly reversed his earlier support for the administration’s trial plan and -- backing the city council members -- also called for the trials to be moved out of Manhattan. It’s hard to overstate the damage that Bloomberg’s position has inflicted on the White House’s efforts to put Khalid Sheikh Mohammed on trial in New York, as the Justice Department announced last November that it planned to do.

It’s also hard to overstate how damaging this is to the president’s efforts to close Guantanamo and bring the perpetrators of the Sept. 11, 2001, attacks to justice in a manner that he believes is consistent with his values and promises. Not because New York is the only place where the trials could occur, but because a change of heart from a powerful mayor, who supports Obama, just gave cover to key Democrats to look tough on terror by joining his push for a new trial location.

There was little reaction on Capitol Hill when New York’s unpopular governor, David Paterson, came out against the planned trials when they were announced by Attorney General Eric Holder at a Washington, D.C., news conference in November.

But Bloomberg is not Paterson.

Today, Spencer Ackerman, at The Washington Independent, posted a letter from Dianne Feinstein, D-Calif., the chairwoman of the Senate Select Committee on Intelligence, to Obama calling for a venue change. It will be hard for the White House to push back on the very public warnings and concerns she voices in the letter, especially in light of the Christmas Day terror plot.

Hours after the letter surfaced, administration officials said they would continue to push for federal court trials but appeared to be abandoning the New York option.

And that, in turn, could fuel efforts by Republicans and others who oppose civilian trials altogether.

A telling tidbit appears at the very end of a Politico story today noting that Scott Brown, the newly elected Republican senator from Massachusetts, campaigned, in part, against civilian trials for terror suspects. Here’s the kicker: Brown's pollsters said the issue polled better for him than even his opposition to health reform.

Since his inauguration, the president has repeatedly taken positions regarding Guantanamo and detention that surprised his supporters on the left.

As a candidate in August 2008, Obama said: "It's time to better protect the American people and our values by bringing swift and sure justice to terrorists through our courts and our Uniform Code of Military Justice."

As president, his advisers stressed that Obama was focused on prosecutions, unlike his predecessor. No Guantanamo detainees were convicted in federal courts during the Bush administration. Three prisoners were convicted in military commissions -- a system that Obama derided as illegitimate.

Last May, in a speech at the National Archives, Obama again pushed for prosecutions in federal court. But he also embraced reformed military commissions and said some suspects would be held indefinitely.

“There may be a number of people,” he said, who could be held without charge or trial after Guantanamo closes. Last week, his task force recommended holding 50 detainees, roughly a quarter of the remaining prisoners at Guantanamo, and two administration officials said the number could be higher.

No more than 35 detainees of the 240 who were in the prison when Obama took office are likely to face charges anywhere. So far, the administration has charged just one detainee in federal court. Five others, including the alleged Sept. 11 conspirators, are likely to face charges. And five other detainees will be charged before military commissions.

The White House knew months ago that it would not be able to meet a one-year deadline for closing Guantanamo. The White House is still trying to figure out a way to move detainees from Guantanamo to a prison facility in Thomson, Ill. Now it is likely that it will also be searching for new trial venues.

Obama did not mention Guantanamo in his State of the Union speech Wednesday night, and the White House has set no new deadline for closing the facility.