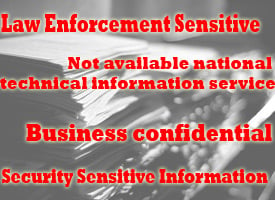 These are among the more than 100 special designations federal agencies apply to information that is not officially classified but in their view requires special handling.

The special markings on government records often mean that agencies withhold unclassified information from the public, Congress and even other government agencies, according to a report (PDF) released this week by OMB Watch, a group that promotes transparency in government.

"Only by sharing information can we make greater use of the information," said Sean Moulton, director of federal information policy for OMB Watch. "If one person knows it, and it's locked in a file cabinet, it's useless, even to the government."

The OMB report follows a recent executive order from President Barack Obama aimed at bringing order to what critics say has become a confusing and inefficient system for deciding what government records truly need protection.

These special designations are not new. Government agencies have employed them for decades. But after Sept. 11, 2001, new categories were created and existing categories were applied more broadly, Moulton said.

In 2003, for example, the Federal Energy Regulatory Commission created a new category called Critical Energy Infrastructure Information. That halted the release of information about dam safety and other potential risks in communities.

Shortly after it formed, the Department of Homeland Security wrote rules on "critical infrastructure information" that protected information submitted by companies to the federal government.

And in a March 2006 report, the Government Accountability Office found 57 categories for "sensitive but unclassified" terrorism-related information, 16 of which belonged to one agency.

Most of the 26 agencies interviewed by the GAO reported no internal system for training staff in using special records designations or how to handle records that had special labels.

But now, under an administration that says it is committed to transparency, open-government advocates say the proliferation of special markings needs to be addressed.

In its report this week, OMB Watch points out that many of the designations are applied inconsistently within and across agencies. And the lack of specific definitions for categories leads to decisions about disclosure being made by individual workers.

Some moves already have been made toward fixing the jumble of agency markings.

The memo did not address many other special designations agencies use.

Obama's executive order on May 27 called for a new task force to review special designations: "These imperatives include protecting legitimate security, law enforcement, and privacy issues as well as civil liberties ... ensuring that the handling and dissemination of information is not restricted unless there is a compelling need."

The recommendations of the task force, which Obama said should include "a broad range of agencies from both inside and outside the information sharing environment," are due back to the administration in late August.

In its report, OMB Watch recommends that a new policy reduce the number of labels used to control information and reduce the amount of information being categorized. It also encourages the administration to keep public disclosure in mind when it develops processes for handing CUI and calls for protecting whistleblowers who "disclose CUI records to uncover waste, fraud, and abuse."

Steven Aftergood, director of the Project on Government Secrecy at the Federation of American Scientists, said he worries that a comprehensive revamp of the system might restrict more information. Aftergood favors a more limited approach.

"Let's take it a step at a time and see what happens," he said.