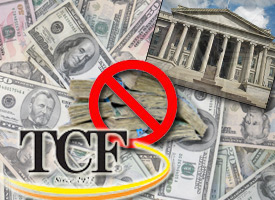 Like IberiaBank, TCF says the strings attached to the money were the dealbreaker. Under the new executive compensation limits in the new stimulus bill, the bonuses for TCF's five most senior execs and 10 next highest compensated employees would have been affected. Here's the bank's CEO in a statement:

The rules have definitely changed... In November when we agreed to accept the funds under the Capital Purchase Program, it was with the understanding that only healthy banks would be granted the funds... Recent actions by the U.S. Treasury and possible congressional or regulatory restrictions/mandates changed the rules. As a result, public perception views those banks that took the TARP money as having done so out of weakness and a need to survive.

Another bank, Northern Trust, which got $1.58 billion from Treasury, has also recently made noises about returning the money after its sponsorship of a golf tournament and accompanying parties got fingers wagging in Congress.