The banks' flawed foreclosure practices should draw even more attention to their poor record in the handling of homeowners seeking mortgage modifications, government officials say.

More evidence for that poor record came Monday, with the release of new data for the government's modification program, which aims to prevent foreclosures. We've updated our graphical rundown of the numbers, broken down by each bank or mortgage servicer participating in the program. Take a look.

While 496,000 homeowners have received a modification through the program, many more, 700,000, were initially accepted into the program on a trial basis only to be booted out later. As we showed last month, most have been disqualified despite making their trial payments.

"[Servicers are] in some real trouble here, they face sanctions and other penalties, they need to get serious and start doing loan workouts and also cleaning up their formerly fraudulent practices," Cordray said. Servicers have done a poor job of handling modifications in part because they view foreclosing as less costly, he said. But that's only because they've been cutting corners, and they can't do that anymore. "That levels the incentives a little more," he added. 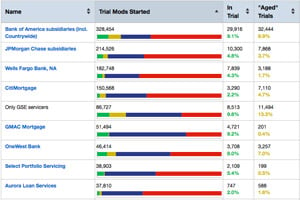 Click to our graphical rundown of the numbers for the government's modification program.

Speaking last week after a meeting with other federal agencies on the foreclosure issue, HUD Secretary Shaun Donovan redirected attention to how servicers were handling homeowners with loans insured by the Federal Housing Agency (FHA), part of HUD, before the point of foreclosure. (Almost 30 percent of all mortgages are now backed by the FHA, whose insurance program began during the Great Depression to help middle-income borrowers get loans.)

A department review of the largest servicers of FHA loans found that some were not "doing what they should be to help keep people in their homes," Donovan said on PBS's NewsHour. "It's not acceptable, for example, that even though we require them to, a servicer might never pick up the phone and reach out to a borrower to find out what problems there are, why they're late on their payment, or might not provide them with a modification, even if they're required to do that."

As we've reported, servicers have also been breaking the rules of the administration's modification program (which are different from rules for FHA loans). The Treasury Department has yet to penalize a servicer, despite numerous threats. The Treasury doesn't have the same power over servicers that the FHA does, but it could withhold the financial incentives that are offered through the program for completed modifications.