Tired of tracking the meltdown? Take a breather for a moment and head...to Guantanamo Bay. 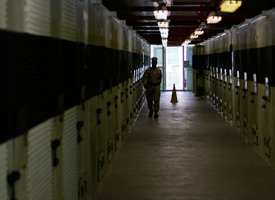 The planned war crimes trials there are still inching forward -- and still stumbling. According to an affidavit filed in a Gitmo court yesterday, another military prosecutor has quit the tribunal in protest, citing lack of fairness. The officer, Lt. Col. Darrel Vandeveld, is the fourth prosecutor to step down from the tribunals.

Vandeveld had been assigned to prosecute the case of Mohammed Jawad, who was captured as a teenager in Afghanistan after allegedly throwing a grenade at U.S. soldiers in late 2002. (The defense claims Jawad was forced to fight with the Taliban.) In a four-page declaration, Vandeveld complained that the government hadn't given the defense all "potentially exculpatory evidence."

"In my view," Vandeveld wrote, "evidence we have an obligation as prosecutors and officers of the court [to turn over] has not been made available to the defense."

Jawad's lawyer told the Los Angeles Times that Vandveld was prepared to testify for the defense but has been blocked by the prosecutor's office. Pre-trial hearings are scheduled for today and Friday, and Jawad's lawyer said he's going to ask the judge to compel Vandveld's testimony.

If Vandveld does end up on the witness stand, it wouldn't be first time a Gitmo prosecutor has gone there. This past spring, the former chief prosecutor Col. Morris Davis testified for the defense in Gitmo's first war crimes trial and spoke of political interference in the process. And like Vandveld, Morris also resigned in protest of how the tribunals were being run. Other active-duty officers have echoed Davis' complaints.

Also last month, the deputy commander of Gitmo testified at another pre-trial hearing for Jawad that the chief legal adviser overseeing the trials had an approach of: "Spray and pray. Charge everybody. Let's go. Speed, speed, speed." That adviser has since been shifted to what the Miami Herald describes as "war court czar in charge of logistics."

As for Vandveld's objections, the current chief prosecutor at Gitmo dismissed them. "There are no grounds for ethical qualms," the prosecutor told reporters. "We are the most scrupulous organization you can imagine in terms of disclosure to the defense."

One other note: Noneof thepapers covering Vandveld's resignation seem to publish the four-page affidavit that detail his objections to the trial. We'll do our best to track it down and post it.