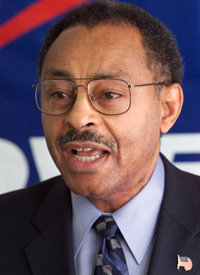 No one ever said Illinois Gov. Rod Blagojevich didn't have guts.

Despite being arrested three weeks ago for conspiring to sell Barack Obama's Senate seat in exchange for wide-ranging personal benefits, Blagojevich might be about to appoint a replacement to the vacant seat.

The Chicago Tribune is reporting that Blagojevich is tapping former Illinois Attorney General Roland Burris, 71, for the spot. Even after Blagojevich's arrest, Burris sought to win the governor's support for the appointment, the Tribune's report said. Burris lost to Blagojevich in the 2002 gubernatorial Democratic primary.

Blagojevich called a press conference for 2 p.m. today (CST) in Chicago. He still holds the sole power to appoint anyone (including himself) as Obama's successor and will continue to unless he resigns or is impeached, in which case the decision will fall to Lt. Gov. Pat Quinn.

Still, the appointment would be a surprising move for the disgraced governor, given that congressional Democratic leaders in Washington warned they would refuse to seat anyone appointed by Blagojevich. Senate Majority Leader Harry Reid wrote Blagojevich a letter the day after his arrest saying, "We write to insist that you step down as Governor of Illinois and under no circumstance make an appointment to fill the vacant Illinois Senate seat."

Even Blagojevich's attorney, Ed Genson, said earlier this month that the governor wouldn't make the pick. "Harry Reid said that they're not going to accept anybody he picks," Genson said. "Why would he do that?"

We don't know, Ed, but we'll report back after Blagojevich's news conference.