A Boston hospital has notified the Massachusetts medical board that it has restricted the work of a world-renowned endocrinologist criticized for espousing controversial theories as an expert witness for people accused of child abuse.

The action against Dr. Michael Holick is cited on his profile page on the board’s website under “health care facility discipline.” The listing is intended to alert members of the public who visit the site that Boston Medical Center, where Holick practices, has restricted his rights or privileges.

Last September, ProPublica and The New Yorker reported that Holick had testified in hundreds of child abuse cases worldwide and almost always blamed broken bones and other injuries on a rare genetic disorder. At the time, Boston Medical Center said that it had barred Holick from treating or evaluating children under age 13 beginning in May 2017. But Holick continued evaluating children in suspected abuse cases as part of an approved research project, and it now turns out that the discipline was not reported to the board until this past February.

A hospital spokesman, in an email last week, wrote that the filing with the medical board “is consistent with” the information it provided ProPublica last year. The spokesman, David Kibbe, also indicated that Holick is still allowed to evaluate children who participate in his research project.

The medical board requires hospitals to report disciplinary actions within 30 days of taking them. When asked about the 21-month gap between the hospital barring Holick from treating children and the report to the medical board, Kibbe responded, “We complied with our reporting obligations.” He offered no further explanation.

A spokesman for the Massachusetts Board of Registration in Medicine said the details of the hospital action against Holick are confidential.

Holick, who did not respond to calls or emails seeking comment for this story, is best known in medical research circles for pioneering work related to vitamin D. He discovered the active ingredient in the vitamin, leading to treatments for bone disease in kidney patients. He also figured out that orange juice helps the body absorb vitamin D, a finding that led to the U.S. Food and Drug Administration approving vitamin D-fortified orange juice.

Earlier this decade, Holick began working as an expert witness in child abuse cases in the U.S. and abroad. He has consulted or testified in more than 300 cases, always on behalf of the accused. As of last September, he had never concluded that a child was abused, and he had almost always attributed the injuries to Hypermobile Ehlers-Danlos syndrome, a condition that affects the connective tissues of the skin, bones and joints and has been linked to bone fragility in adults.

The ProPublica-New Yorker article focused on a social services investigation in South Carolina that found that 3-week-old twins had allegedly been abused. The parents consulted Holick, who concluded that both babies had Ehlers-Danlos, and that fractures attributed to abuse could have been caused by bone fragility associated with the genetic condition. Nearly eight months later, one of the twins suffered a severe brain injury and the child’s father was charged with abuse to inflict great bodily injury upon a child. That criminal case is pending.

“Thousands, if not tens of thousands,” of parents worldwide have been falsely accused of fracturing their children’s bones, Holick told ProPublica last year. “It’s just terrible. I feel so sorry for these parents.” 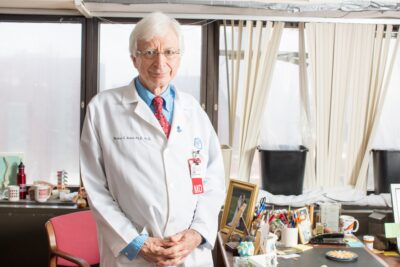 His work has drawn rebukes from other physicians who specialize in treating patients with the genetic disorder. They cite a lack of research supporting Holick’s view that Ehlers-Danlos can cause broken bones in very young children. Holick has also been criticized for diagnosing the condition in children he didn’t examine in person.

Boston Medical Center is the teaching hospital affiliated with Boston University School of Medicine, where Holick is a longtime faculty member. A spokeswoman for the medical school said Holick remains on the faculty.

Boston University has defended Holick’s right to testify about his Ehlers-Danlos theory in court. The dean of the medical school, Karen Antman, in a letter to another physician critical of Holick, wrote that she didn’t need to know the details of his expert defense work. “As a member of the Boston University School of Medicine faculty, academic freedom allows Dr. Holick to espouse his views without censorship from the University,” she wrote.