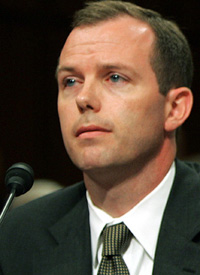 Here's a clear sign that the Jack Abramoff investigation is still underway: Kevin Ring, a former Abramoff associate and former aide to both Rep. John Doolittle (R-CA) and John Ashcroft (when Ashcroft was a senator), has been indicted on corruption charges. Ring is the 11th public official to be charged in the investigation.

The feds have thrown a slew of charges in a 46-page, 10-count indictment at Ring, but they amount to two main accusations: 1. He allegedly conspired to corrupt public officials with gifts, tickets, and other aspects of the Abramoff favor machine (Joe Albaugh, former chief of staff to ex-Rep. Ernest Istook (R-OK) and staffers of a "Representative 5" are singled out) 2. He obstructed justice by lying (about his receipt of a $135,000 kickback, among other things) to investigators hired by the lobbying firm he worked for. Prosecutors say that Ring lied knowing that his answers would be communicated back to federal investigators.

"Representative 5," for whom Ring worked from 1993 to 1998, fits the description of Rep. John Doolittle (R-CA). Doolittle has long been under investigation as part of the Abramoff investigation and is not seeking reelection.

Ring was arrested and is scheduled to appear in court in Washington, D.C. today. We'll have more a little later.

Update: Here is the indictment (PDF).