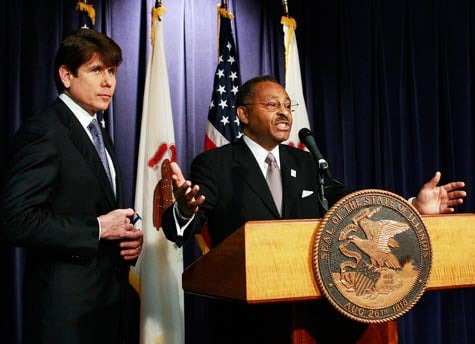 Roland Burris, sworn in today as Illinoisâ junior senator, has done his best to distance himself from recently impeached Illinois Gov. Rod Blagojevich, who appointed him to the Senate last month.

A close examination of their relationship reveals a different story.  In truth, the tale of Rod and Roland (or Burris and Blagojevich, whichever) evolved from political rivalry to symbiotic political alliance.

Burris hasnât shied away from donating money to Blagojevich, working on his campaign, even holding a fundraiser for the scandal-ridden governor. And once Burris became a state lobbyist, Blagojevichâs administration awarded state business to his firm and its clients.

Once opponents, Burris served on the governorâs transition team after Blagojevich defeated him in the 2002 gubernatorial race.

Burris also helped re-elect Blagojevich in 2006, working opposition research, investigating the governorsâ opponent for weaknesses, a Chicago Tribunereport revealed. In April of that year, Burris hosted a 3,000 person fundraiser for Blagojevich at Chicago's Field Museum. The event likely raised several million dollars for the governorâs re-election bid, according to news reports at the time. Burris attended other Blagojevich fundraisers, including one last June–a time when the governorâs administration was plagued by scandal.

Since that 2002 campaign, Burris, his lobbying firm and his law firm have donated more than $20,000 to Blagojevich.

Burrisâ support was rewarded after he became a lobbyist.

His lobbying firm received about $295,000 in state contracts from the department of transportation during Blagojevichâs two terms, according to state comptroller records.

Burrisâ clients also benefitted, to the tune of hundreds of thousands in state business.

In 2003, the Blagojevich administration awarded Loop Capital Markets, a Chicago investment bank, $753,800 in pension bond business. Burris' firm earned $30,000 for six months of lobbying for the company, according to 2003 news reports.

"We make sure that the client has access, and the client has to have a product or services that the customer can use, and that it is a competitive product," Burris said at the time. He ceased to be a registered lobbyist one week after his appointment to the Senate.

Durkin, the Illinois Republican, recently subpoenaed Burris to appear before an Illinois House impeachment panel scrutinizing how Blagojevich came to pick Burris. (Three weeks before the appointment, the FBI had arrested Blagojevich for trying to sell the Senate seat for personal benefits.)

Durkin found Burrisâ testimony about the circumstances of Blagojevichâs decision to appoint him "inconsistent," he told ProPublica. While denying any quid pro quo with the governor, Burris seemed to offer contradictory accounts of his attempts to capture the Senate seat. In a sworn affidavit filed last week, Burris first reassured the panel that he didnât discuss the Senate post with Blagojevichâs "representatives" until late December. Three days after filing the affidavit, however, Burris told the same panel that he had expressed interest in the seat to Blagojevich's former chief of staff in July or September.

"If you're close to the governor, you know, let him know I'm certainly interested in the seat," Burris said he told Lon Monk, who became a lobbyist after leaving Blagojevichâs administration in 2006. (In the criminal complaint against Blagojevich, federal prosecutors allege that a lobbyist, later reported to be Monk, requested a client donate $100,000 to Blagojevich in exchange for signing favorable legislation.)

Monk has not been accused of any wrongdoing. And a lawyer for Burris insisted itâs inaccurate to consider Monk a "representative" of the governor since Monk wasnât working for Blagojevich when Burris approached him last year.

At the impeachment panel hearing, state Republicans also probed whether Burrisâ lobbying partner helped secure Blagojevichâs wife a fundraising job at a local charity. First lady Patricia Blagojevich became the director of development at the Chicago Christian Industrial League in September of last year, a spokeswoman for the organization told ProPublica. Burris' partner, Fred Lebed, is one of 17 members of the organizationâs board. Burris said he didn't know anything about how she got the job.

We called Burris for comment today, but have yet to hear back.