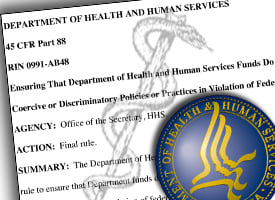 A contentious midnight regulation we've been following has been finalized today, significantly strengthening the government's power to inflict financial pain on any health provider deemed to discriminate against health workers who refuse to perform tasks they find morally objectionable.

Although about 200,000 letters of opposition rolled in, the administration made only technical changes to the rule (PDF). When it becomes law in 30 days, any worker, trainee or volunteer from health insurance companies to podiatry schools will be emboldened to refuse to participate in tasks that offend their conscience.

The regulation singles out abortion and dismisses the notion that health-care workers would be empowered to deny care to immigrants, AIDS patients or sex-change seekers.

The rule is expected to affect more than 570,000 health providers -- including about 5,000 hospitals and 230,000 doctors' offices -- that have to sign "certifications" that they will abide by the rule. The rule's financial analysis concludes that the time taken by thousands of employees to sign the certifications will cost the health-care system about $40 million.

What’s more significant, according to the director of the Planned Parenthood Federation of America, is that the rule may cut off patients' access to needed information and care.

"This is a last sort of parting shot at women's health that I think will create chaos among providers across the country," said Cecile Richards, PPFA president.

A 127-page response (PDF) to the rule's opposition basically says that if fewer women get abortion counseling or contraception, then it only goes to show that "health care providers...had previously been compelled to deliver the service over their conscience objections."

One law mandates that female rape victims who go to the emergency room have a right to be informed of all their options -- including abortion. It also throws into question state laws that mandate equal insurance coverage of contraception.

Finally, the rule throws off the legal balance between an employee's right to refuse morally repugnant tasks with an employer's ability to carry out its business (say, fill prescriptions for birth control). In response to other Bush administration officials' objections to the rule's skewing of the balance, the new rule only "threw out a cloud of verbiage," Evans said.

"Final," however, is a relative term in the world of rulemaking. Congress will have 75 working days to overturn the regulation when it returns in 2009. The Obama administration is likely to take steps to reverse it.