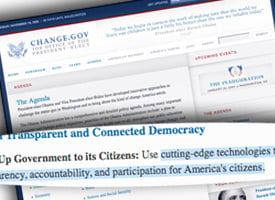 The agenda pages that we told you disappeared from Change.gov, President-elect Barack Obama's transition Web site, have returned in newly retooled form. Within the 22-plus agenda categories are items that address how the new administration will increase transparency in government.

The technology page promises that the new administration will open government to citizens by using "cutting-edge technologies to create a new level of transparency, accountability, and participation for America's citizens." That agenda item, however, is listed below one promoting the protection of privacy -- one of the most common reasons the federal government has withheld information over the years.

The items listed on the new page are basically the same as before, but they are more tightly written and no longer include derogatory statements about the Bush administration such as: "The Bush Administration has been one of the most secretive, closed administrations in American history." Apparently, that's now a secret.

Among the 22 items on the transition team's ethics agenda page are more goals -- some more specific than others -- aimed at increasing transparency:

Many of those items were on the previous page. But the revised page also includes a new section on spending taxpayer money wisely.

Other items on the president-to-be's agenda include: education, health care and a section on "Sportsmen" that lauds "the great conservation legacy of America's hunters and anglers."