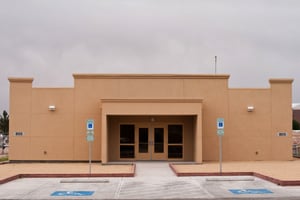 WASHINGTON, D.C.--In response to an investigation by ProPublica and NPR, three congressmen are demanding answers from Fort Bliss medical officials about the care being provided to soldiers with traumatic brain injuries.

A spokeswoman for Teague said today that the congressman was also considering calling for the U.S. Government Accountability Office to review the military's handling of traumatic brain injuries and may pay a visit to Fort Bliss to personally inspect the facilities.

"We are deeply concerned that our government could be failing those to whom we owe the most," the three men wrote in their letter. "These reports must be investigated and receive the full attention of the United States Congress and government."

In our investigation, we found that soldiers at Fort Bliss struggled to receive diagnosis and treatment for so-called mild traumatic brain injury. Such head traumas, also called concussions, often leave no visible signs of damage, but can result in long-term mental and physical problems.

Official military figures show that about 115,000 troops have suffered mild traumatic brain injuries since 2002. But we found that many troops have injuries that go undiagnosed or that are never documented in their medical records. Top Pentagon officials acknowledged in interviews that the true toll is likely far higher. Unpublished military studies reviewed by ProPublica and NPR suggest tens of thousands of mild traumatic brain injuries have gone uncounted.

Most soldiers with concussions recover quickly, but civilian studies indicate that 5 percent to 15 percent of those who suffer such injuries have lingering cognitive problems.

The Senate Armed Services Committee announced Wednesday that it will hold a hearing on June 22 to look into suicide, traumatic brain injury and other so-called invisible wounds.

Our investigation found that Fort Bliss had erected billions of dollars of new housing and accommodations for additional troops to deploy to war zones, but had failed to open the doors of Building 805, a traumatic brain injury clinic completed nearly a year ago. Although the Pentagon designated the base as a site for enhanced treatment for brain-injured soldiers in 2007, the base did not hire a full-time director for the program until October 2009.

Soldiers at Fort Bliss told us they waited weeks or months just to get appointments to see doctors and often received far fewer hours of therapy than patients at well-regarded civilian clinics. Some were prescribed therapy for psychological problems that did little to relieve their troubles with memory, balance and reasoning.

The three congressmen, who are part of the bipartisan Congressional Invisible Wounds Caucus, have asked the medical commander at Fort Bliss, Col. James Baunchalk, to answer several questions about the base hospital's treatment program.

They asked to know how many patients with traumatic brain injury, or TBI, were being treated at Fort Bliss, how long soldiers had to wait for appointments, and whether the hospital had systems in place to address soldiers' complaints.

"It's pretty important that (Fort Bliss) be at the front of addressing TBI and PTSD," Teague said in an interview. PTSD, or post-traumatic stress disorder, is a psychological wound that often accompanies TBI.

Fort Bliss officials have declined to answer such questions from ProPublica and NPR. Baunchalk also denied ever having received complaints regarding brain injury care, despite e-mails and letters written to his assistants and superiors by soldiers and family members.

Fort Bliss officials have defended their treatment of soldiers. In a response this evening, a base spokesman said they would respond to all questions posed by the congressmen by June 21.

"Our commitment is to provide quality health care, in a timely manner, to those who serve in our military," the statement said.