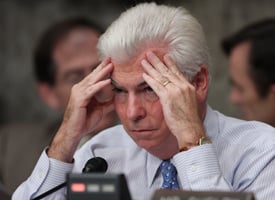 Could Sen. Chris Dodd -- the Senate banking boss who was embroiled in a personal mortgage scandal even as he lead the charge against the subprime crisis -- have heard the tick-tock of ProPublica's Promises Clock all the way from Hartford, Conn.?

Yesterday, Dodd basically fulfilled his 193-day-old promise and offered up documentsdetailing his mortgages. There was one important caveat: Reporters weren't allowed to leave his office with the papers. Dodd did allow a report compiled for his lawyers by a third party, which included all the details of his mortgage, to be posted on Web sites.

Despite six months of slacking, and last-minute prohibitions against photocopying, it appears Dodd had little to hide. The documents show interest rates and fees obtained from the late mortgage giant Countrywide within the average range for June and July 2003, months when mortgages were historically cheap and refinancing was the summer fad. Here are the less-than-lurid details (PDF):

Christine Stuart, a reporter for CTNewsjunkie.com, a Connecticut news site, said the numbers in the report matched those tucked away in the hundreds of pages of closing documents and internal Countrywide memos she saw in Dodd's office Monday. (She added that although Dodd offered to let reporters spend the whole day with the documents, most had other news to cover that day, and his office had "sprung" the mortgage-document payload on journalists at 9:30 the same morning.)

Dodd's office hasn't yet responded to our requests for comment. But it's possible reporters were prohibited from making copies of the documents because of privacy concerns. Dodd's staff had redacted social security numbers and other personal information from the documents, but Stuart told us "they actually didn't do such a great job of it." There's no indication that the actual documents -- hardcopies with some interesting marginalia, according to Stuart's report -- will be public any time soon.

In Dodd's Monday press conference, he told the dozen or so reporters who were able to make it to the last-minute gathering, "We were never offered special or sweetheart deals, and if somebody had made that offer, we'd have severed the relationship immediately."

He apologized for not sharing his mortgage information sooner, saying he wanted to wait for the Senate Ethics Committee to finish its review.

He also distanced himself from then-Countrywide CEO Angelo Mozilo. "Let me be very clear: We are not friends of Angelo Mozilo, and we have never been a friend of his." The first he heard of Mozilo, he said, was from the reports last summer on his own mortgage-refinancing activities.