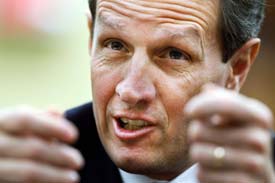 Back in early February, the administration laid out its approach to executive compensation for companies that received TARP money. It was a two-fold approach: companies that had received a bailout in the purest sense (i.e., to stop their fall) would get one strict set of rules, and all other companies would get another. But just a couple of weeks later, Congress laid down a new law: All bailout recipients would see their executive pay limited. Making things more confusing, the administration's rules focused on salary, putting a hard cap of $500,000, while Congress' rules limited bonuses.

The two sets of rules were never reconciled -- until today, apparently, when Treasury Secretary Tim Geithner will announce that he's throwing out the administration's rules in favor of the ones Congress passed, because "taken together, the two efforts were more punitive than the administration had intended," the Wall Street Journal reports. Geithner is also expected to announce that he'll push to give the SEC power to force companies to allow shareholders to vote on executive compensation.