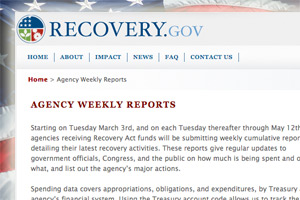 Federal agencies began sending their initial reports to the Office of Management and Budget last week, and the White House posted them on the official stimulus Web site, Recovery.gov, yesterday.

For a Web site with the stated goal of allowing "citizens to hold the government accountable for every dollar spent," there's not a lot of information there. The agencies aren't required to report financial data until April 6, and in the meantime, the reports seem relegated to general pronouncements about "major actions," stripped of most specifics. Take a look for yourself here.

The reports tell us that the Department of Defense has created an "internal governance structure," but the only detail divulged is that its members meet daily. The Department of Health and Human Services describes one planned initiative: "We could possibly announce and/or begin releasing funds under operating plans for additional [stimulus] programs."

When Peter Orszag, the director of the Office of Management and Budget, described his requirements (PDF) for the initial weekly reports in a memo last month, it was clear that expectations would not be that high at the get-go. The first reports are "to help populate early phases of Recovery.gov," he wrote. The plan is to ramp up as more projects break ground.

Even if more information were available, there would still be a couple of obstacles to making sense of these reports. For one thing, the expenditures and appropriations are described by "treasury account code" (PDF) rather than plain English.

The reports will be submitted to Orszag's office every Tuesday and will cover the activities and expenses of the week ending the previous Friday. Judging by this first installment, it appears the White House will be posting these as Excel spreadsheets. Not all agencies are following the exact same format, but they all comply with the requirements Orszag laid out in his memo.