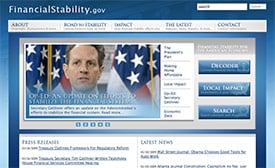 As promised, the Treasury Department rolled out a brand new Web site this week: FinancialStability.gov is supposed to be the citizen’s guide to the $700 billion bailout (although the word “bailout” doesn’t actually appear anywhere on the site). It’s a marked improvement over the old site, which was not much more than a hastily assembled jumble of links.

First, the bad news: If you were looking for a clear breakdown of how many taxpayer dollars Treasury has committed so far, you won’t find it there. You can only arrive at such a total with some painstaking addition (which we’ll break down in a subsequent post). Providing that ongoing tally is a resource we hope to provide with a new, revitalized version of our list of bailout recipients coming soon.

There is good news. Treasury has followed through on its promise to post the contract for each investment. You can finally get Treasury’s list of its investments in a format other than a PDF file – and those wanting a downloadable spreadsheet can get it here.

Looking back on Treasury Secretary Tim Geithner’s description in February of what the site would be, however, there are a couple features still lacking. The site doesn’t yet show “the return on the government’s investment” – by which he meant how much Treasury has collected in dividends from its preferred stock investments in the banks. (As we noted yesterday, Treasury had collected about $2.9 billion in dividends as of March 20. That came from a Government Accountability Office report, which also questioned why Treasury wasn’t publishing this sliver of good news itself.)

The site also doesn’t show “whether boards of directors are being responsible with taxpayer dollars and how they're compensating their executives.” We’ve asked Treasury whether these features will be forthcoming, and we’ll let you know what they tell us.