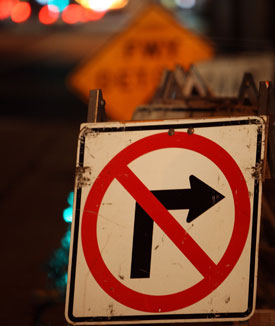 Sloppy safety practices at highway work zones have contributed to an average of two deaths per day over the last five years, according to this lengthy piece from the New York Times’ Mike McIntire.

At least  4,700 people have been killed over that period, and 200,000 more injured, because of what the Times calls “a litany of mundane hazards: concrete barriers in the wrong position, obsolete lane markings left in place, warning signs never deployed.” A particularly nefarious culprit is the drop-off at the edge of the pavement, which, when too steep, leads to accidents that kill some 160 people each year.

But McIntire found there are “virtually no laws or regulations mandating safety measures in work zones,” and what standards do exist are loosely enforced, with few penalties leveled against contractors who violate them. The Times finds fault not only with the contractors who violate guidelines, but also with the regulators who fail to prevent that behavior.

“A lot of work-zone crashes are entirely preventable,” Ohio’s chief traffic engineer tells the Times. “It’s not explainable by just driver error or inattention. We can intervene to keep them from happening.”

But according to the article, many states have lobbied to prevent a larger federal role in regulating safety practices in work zones. Last year, the Federal Highway Administration proposed stricter rules for things like the use of electronic warning signs. States pushed backed, including Arizona, whose then- transportation director, Victor Mendez, denied that work-zone safety required federal intervention.

“People at the state level are out there every day, they understand how to implement projects,” Mendez told the Times. “And incidents will happen, it’s unfortunate, not anything that any of us want. But I think at the end of the day, you have to be looking at the assumption that, like any professional, whether it’s your doctor or your attorney or an engineer, that they’re exercising their best professional judgment when it comes to safety.”

As the Times notes, Mendez was appointed in July as head of the Federal Highway Administration.