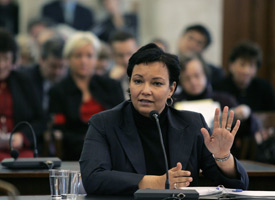 Lisa Jackson, who President-elect Barack Obama is expected to name Monday evening to lead the Environmental Protection Agency, is already being hailed as a historic choice. The former head of the New Jersey Department of Environmental Protection and transition team member would be the first African-American EPA chief, and supporters have praised her work ethic, approachability and efforts to regulate greenhouse gases in New Jersey.

But Jackson's critics, including a senior scientist who quit her department in frustration, say she has been too close to industry, withheld information from the public and fallen well short of the pledge she made when taking office in February 2006 to fix the state's beleaguered toxic waste program.

"The most important thing we are doing is developing a new ranking system to prioritize sites so that we focus our resources on the worst cases, those that present the greatest risk to public health and the environment," said Jackson in state senate testimony (PDF) in October 2006.

"She identified this as her highest priority, but she never followed through," says Jeff Ruch, executive director of the Washington D.C.-based Public Employees for Environmental Responsibility, or PEER. "This failure to perform risk-based ranking for determining cleanup priorities has contributed to the belated discovery of contaminated schools and day care centers."

A NJDEP spokesperson said the system is now being tested and should be in place by Autumn of 2009. Jackson herself did not respond to ProPublica's repeated requests for an interview.

In a report released this summer, the EPA's inspector general slammed New Jersey's failure to clean up (PDF) several toxic waste sites in a timely manner, and accused the state's environmental agency of going easy on polluters and failing to seek necessary support from the EPA. The report said the department bore at least partial responsibility for "not implement[ing] agreements on cleanup milestones, Agency responsibilities, and enforcement actions."

The report even recommended that the EPA take over as the lead cleanup agency at seven sites -- a surprising recommendation, since the inspector general has consistently bashed the Bush administration's handling of Superfund sites.

"If the EPA is saying that New Jersey's enforcement is bad, you know there is a serious problem,” says Robert Spiegel, executive director of the Edison Wetlands Association, a New Jersey based non-profit that closely monitors several Superfund sites throughout the state. Spiegel says he had urged Jackson to take more immediate action on some sites, and that Jackson's field staff had done the same, but their pleas had been ignored.

New Jersey, long a center for the chemical manufacturing industry, has gained notoriety in the environmental community for its widespread pollution.

A 2007 report by the Center for Public Integrity, a non-profit investigative journalism organization in Washington, D.C., found that New Jersey has 115 Superfund sites -- more than any other state. Since the Superfund program was established in 1980, only 22 of New Jersey's sites have been cleaned up to the point where they can be removed from the EPA's National Priorities List, the EPA's list of the most hazardous waste sites in the country.

Jackson has long talked about repairing the state's cleanup effort. In a formal response to the inspector general report, the state's director of hazardous waste said that "New Jersey's new proposed reforms may be a model for other states when looking to improve their cleanup programs."

Jackson has also supported a controversial Corzine-backed proposal to outsource the department's cleanup efforts to consultants, which would potentially mean cleanups conducted by groups that also work for the companies responsible for the contaminated sites.

Many, including some of Jackson's supporters in the environmental community, have lambasted that policy for the conflict of interest it would create.

As part of its 2007 investigation, the Center for Public Integrity found that this practice, which already occurs with federal contracts doled out by the EPA, allows polluters to profit from their own pollution by obtaining contracts to clean up Superfund sites they may have helped create years before. Opponents of Corzine's proposal charge that it would allow the same to happen with New Jersey contracts. This reporter contributed to that project while working until early this year at CPI.

Critics of Jackson's approach have also focused on what they see as her weak response to two contaminated New Jersey sites: One is a multi-million-dollar condominium community built on top of land where high levels of chromium, a carcinogenic chemical, have been found. The other involves Kiddie Kollege, a day care center developed inside an abandoned thermometer factory, where more than 30 children were exposed to mercury, a neurotoxin that slows brain development in children.

In September, a division of the Centers for Disease Control released a study (PDF) concluding that people who live near the chromium contaminated sites in Hudson County have higher rates of lung cancer.

A New Jersey department scientist, Zoe Kelman, quit out of frustration over the chromium issue. She told ProPublica that she has concerns about Jackson taking the helm of the EPA because of what she sees as Jackson's lax response to pleas to strengthen chromium standards at planned condo communities in Hudson County, N.J.

"I had high hopes when Jackson took over," said Kelman, who had been a chemical engineer for the state. Kelman says that Jackson "ignored" a 50-page letter she wrote about how a protective cap made out of synthetic materials and soil would not sufficiently control chromium-laden waste in Jersey City. "I was perplexed that someone with her background would not be able to understand the issue, and recognize that we should be erring on the side of caution," Kelman said.

The department did respond (PDF) to Kelman's letter, saying that she was criticizing processes that many scientific agencies use to determine risk, and therefore there was little the department could do to address her concerns. (The response, Kelman argues, was essentially lip-service and didn't result in any changes.)

A 2004 investigation by the Newark Star-Ledger found that Honeywell Inc., PPG Industries and Maxus Energy Corporation, the companies responsible for the chromium pollution, spent hundreds of thousands of dollars on lobbying and millions of dollars on their own scientific studies to convince the state of New Jersey that its chromium standard was too stringent.

According to the investigation, when the lobbying effort began, New Jersey considered chromium levels in soil at 10 parts per million to be safe; by the end of the companies' lobbying campaign the chromium standard was raised to 6,100 parts per million: one of the loosest standards in the country, allowing the companies to save millions on cleanup costs.

Not long after the Star-Ledger's investigation, Jackson's predecessor, former department commissioner, Bradley Campbell issued a moratorium on development of the chromium-contaminated land and assigned a panel of department scientists to investigate New Jersey's chromium standard. Kelman was one of the members on that panel.

About a year into Jackson's tenure the panel's assessment of New Jersey's standards came out and Jackson thought it provided reason to lift the moratorium (PDF) on development, while also tightening the chromium standard to 20 parts per million. Kelman believes that move failed to sufficiently protect public health and was premature because a more comprehensive study on chromium was due to be completed by the National Toxicology Program later that year.

In August 2006, Jackson asserted in a press release about the Kiddie Kollege day care center that "inspectors moved in, took samples and shut it down" as soon as they discovered mercury.

But the New York Times reported shortly after that an internal memo showed the department had known of contamination at the site since 1994. New Jersey environment department inspectors found out that the building was being used as a day care center in April 2006, but didn't shut it down until that July.

Jeff Tittel, who heads the New Jersey chapter of the Sierra Club, says Jackson isn't to blame for the Kiddie Kollege incident, and instead points a finger at New Jersey's former environmental commissioner for removing the site from the state's list of contaminated sites.

"Under Jackson, an inspector went out there on his own time, and found out that there was a day care center there," says Tittel. "Did it take longer than it should have? Maybe, but the government doesn't always move as quickly as we would like it to."

Many prominent New Jersey environmental advocates say that Jackson inherited most of the department's problems from previous commissioners, and from staff cuts made by former New Jersey Gov. Christie Todd Whitman, who went on to become EPA administrator herself under President Bush.

"The department in charge of hazardous waste used to have 270 people, now they are down to 150," says Tittel.

Jackson's staffing decisions have also been criticized by PEER. The watchdog group points to her 2006 appointment (PDF) of Nancy Wittenberg, a former New Jersey Builders Association lobbyist, as the Assistant Commissioner for Environmental Regulation as an example of Jackson's ties to industry.

"Her extreme positions and statements as a lobbyist raise legitimate questions about her judgment and capacity to fairly and objectively administer environmental laws," said then-PEER employee Bill Wolfe in a media announcement made at the time of Wittenberg's appointment.

In an effort to determine just how much leverage industry lobbyists have in Jackson's department, PEER filed a petition to get the department to give the public information on its meetings with lobbyists, but the department immediately rejected the petition.

Jackson's supporters ardently defend her record and place much of New Jersey's environmental problems on Gov. Corzine. They say that while Corzine has offered lofty rhetoric about environmental goals, he has not helped Jackson accomplish them. Jackson left the department to take a job as Corzine's chief of staff at the beginning of this month.

"Lisa Jackson has been forced to work without the resources or the leadership at the top to let her do what she wanted to do," says Amy Goldsmith, the state policy director for the New Jersey Environmental Federation. "Corzine just has different priorities, and if the leader isn't willing to lead, it is hard for somebody that's been appointed to take the reins."

Both Goldsmith and Tittel point to Jackson's work on climate change as an example of why she would make a great EPA chief.

Last year, Corzine signed the Global Warming Response Act, which aims to cut greenhouse gases in New Jersey 20 percent by 2020 and 80 percent by 2050.

"Lisa worked closely with the governor to champion this bill, and helped lobby the legislature to approve it," says Dena Mottola, executive director of Environment New Jersey.

But Ruch argues that the New Jersey environment department under Jackson's tenure failed to meet crucial deadlines for drafting procedures to actually implement the law.

"As a result, despite much ballyhoo, New Jersey does not have a coherent game-plan for achieving its climate change goals," Ruch wrote in a letter to President-elect Obama (PDF), opposing Jackson's nomination.

"No one worked more on this issue than my group, and if we thought missing that deadline was a huge concern we would have criticized it, and we didn't," says Mottola.

Eric Stiles, vice president for conservation at the New Jersey Audubon Society, said that while Jackson's record isn't perfect, she has always been receptive to his group's arguments and straightforward about her positions and the competing interests she was considering.