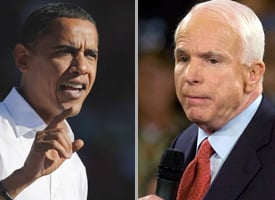 With the market swooning yesterday, Sens. McCain and Obama promised to shake things up. McCain pledged to "put an end to running Wall Street like a casino."

This morning's New York Times probed the candidates' actual records. It concludes that McCain "has never departed in any major way from his party's embrace of deregulation." Indeed, the Times says, McCain "has no history prior to the presidential campaign of advocating steps to tighten standards on investment firms."

A decade ago McCain pushed unsuccessfully for a moratorium on all federal regulations. Asked about that by the Wall Street Journal this spring, McCain said, "I'm always for less regulation. But I am aware of the view that there is a need for government oversight."

McCain added that given the subprime scandal, more regulations might ultimately be appropriate but, "I am fundamentally a deregulator. I'd like to see a lot of the unnecessary government regulations eliminated, not just a moratorium."

The Times also points out that among McCain's top economic advisers are "two outspoken advocates of free market approaches, former Senator Phil Gramm and Alan Greenspan," the former chief of the Fed.

As we noted yesterday, Gramm authored a bill in 2000 that essentially stopped the government from regulating the derivatives and other fancy investments that have fueled the current crisis. (A story this summer in Mother Jones is one of the only stories we've seen that probed the bill and its implications.)

In terms of Obama, with only a short time in the Senate, he's yet to develop much of a record either way on regulating the markets. (Obama did sponsor a bill that would increase penalties for mortgage fraud and increase oversight in the industry.)

So what are the candidates proposing moving forward? Obama has a six-point plan he unveiled this spring that calls for, as the Times puts it, "regulating investment banks, mortgage brokers and hedge funds much as commercial banks are."

Meanwhile, McCain has offered few specifics on his pledge to "reform the way" Wall Street does business.

McClatchy notes that McCain's Web site "contains no proposal outlining regulatory reform for Wall Street." When queried by the paper, the campaign sent what McClatchy calls a "broad outline of McCain's plan, which includes strengthening disclosure in the lending process so borrowers know exactly what they are getting into and complete disclosure of all cash and non-cash compensation of corporate CEOs."