This story was co-published with HuffPost.

Voters in Missouri faced confused poll workers as they went to vote on Tuesday, with many reporting they were turned away for not having valid photo identification. The confusion was a result of an October court ruling that allowed Missourians to cast ballots with a range of forms of identification.

Taylor Fritz, 25, brought the voter registration card mailed to him by the state to cast a ballot at his polling station, the Legacy Park Community Center in Lees Summit. But poll workers there told him the card was not an acceptable form of ID, even though a state website specifically says it is. There was even a poster in the gymnasium where he cast a ballot that stated registration cards were acceptable, Fritz said.

“Lucky for me I was able to show my valid state issued ID,” Fritz, an insurance broker, said in an interview. “The problem is not everyone has a state ID like me.”

Kristen Mitchell, a retired 51-year-old, had a similar experience when she went to vote in Dallas County, in southwest Missouri. She said she saw signs at the polls telling people photo ID was required to vote. Poll workers, she said, told voters they had to have photo ID to cast ballots, and refused to take down the erroneous signs.

Missouri’s voter ID law, which went into effect in 2017, required voters to show a photo ID at the polls. But if a voter doesn’t have an acceptable form of photo ID they could verify their identity using other documents, such as a bank statement or utility bill. Under the 2017 law, if voters used one of those forms of verification, they had to sign an affidavit swearing they “didn’t have a form of identification approved for voting.” But in October, State Judge Richard Callahan, struck down the affidavit requirement, saying it was confusing. Missouri Secretary of State Jay Ashcroft appealed the ruling, but the Missouri Supreme Court declined to overturn it.

Callahan’s ruling meant that Missourians do not have to show photo ID at the polls and did not have to sign any additional documents swearing they were unable to obtain an acceptable form of ID.

Many poll workers were not clear about the new requirement.

Dallas County Clerk Stephanie Hendricks said she was unaware of problems at her polling place.

Hendricks said the small county had to “scrape the bottom of the barrel” for poll workers, who only received 90 minutes of training. This, combined with the very short notice for the legal change, made it difficult to help poll workers understand the law.

“There’s only so much you can get people to absorb in an hour or an hour and a half. We do the best we can, but I can’t say it always soaks in,” she said. “The last few elections it’s been photo ID, photo ID, photo ID, and now all of a sudden the brakes have been thrown on. It’s confusing for people.”

Britt Eubanks, 53, went to use his U.S. passport to vote in St. Charles because he has had issues voting with his driver’s license in the past. When he presented his passport, Eubanks said a poll worker told him he needed his driver’s license. When Eubanks said a passport was acceptable, he said the poll workers told him it would take longer to vote because they would have to enter it in manually. It ultimately took them a few minutes to enter his information, he said.

“I would like to think it was just lack of training,” Eubanks said in an interview.

St. Charles County appears to be instructing its poll workers to disregard the ruling, and has so far ignored demand letters from attorneys at Advancement Project, a civil rights group. Advancement Project attorney Denise Lieberman said the group is considering legal remedies due to the county’s “flagrant disregard” for the judge’s ruling.

Lieberman said dozens of voters have called Advancement Project with complaints about poll workers in Missouri, who are reportedly telling voters who present non-photo forms of ID that they “don’t agree” with the ruling and don’t believe they are required to follow it. Lieberman said the group first sent a demand letter to Rich Chrismer, the local director of elections, this afternoon. He did not respond, and follow up calls to his office were not returned. A letter to the county’s attorney was did not receive a response.

Calls to St. Charles County were not returned. Each time reporters called the county, hold time estimates were greater than one hour. 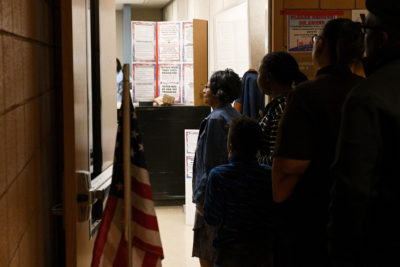 Advancement Project also sent Franklin County a demand letter after voters at two polling locations reported poll workers were refusing to accept non-photo ID. Debbe Door, the Franklin County Clerk, said she was surprised to get the letter but immediately called both locations to review the new rules. She said the late notice made it difficult to impress the rules upon poll workers, and that the county was doing “the best we can” to make sure everyone could vote.

“We did everything we could given that we were on such short notice,” she said. “We’ve got election judges that are 70 or 80 years old and we threw something new at them without an opportunity to train.”

Voters who called the Election Protection hotline reported that poll workers demanded drivers licenses and rejected other forms of ID allowed under the ruling, and pushed back when voters explained that was no longer allowed. Lieberman said her group is seeing the same across the county.

Maura Browning, a spokeswoman for Secretary of State Jay Ashcroft, said the state’s top election official has not received many complaints over the issue.

“We have had very few reports of problems,” she said in an email. “There may have been some confusion in a few of the 3,000 polling places in Missouri, but Judge Callahan’s ruling just 13 days before the election opened up the opportunity for that. Aside from those minor hiccups, the day has gone very smoothly.”

Marc Elias, an attorney with Priorities USA, the group that brought the suit challenging the Missouri law, said that if workers were indeed requiring people to show photo ID or sign an affidavit, they would be violating a court order.

Trey Grayson, who served as Kentucky’s Secretary of State from 2004 to 2011, said it wasn’t uncommon to see poll workers confused about voter ID requirements, particularly when there had been a court-ordered change so close to an election.

“I think one of the challenges voter ID laws vary state by state,” he said. “They’re always in the news, it’s easy for even well meaning poll workers to kind of get confused.”