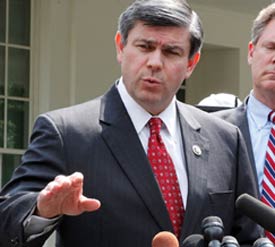 Yesterday, we partnered with Politico to expose how Rep. Mike Ross (D-Ark.), who is playing a central role in the health care debate, sold commercial property to the owner of a pharmacy chain for substantially more than an assessment and appraisal say it’s worth.  Last night, in the first few minutes of "The Rachel Maddow Show," Maddow explained the ramifications of the deal to her TV audience.  CNN’s Jessica Yellin also reported on it for "The Situation Room."

Today, Citizens for Responsibility and Ethics in Washington asked the Justice Department to investigate whether Rep. Ross had "engaged in bribery and honest services fraud" in relation to the sale.

While Rep. Ross refused to discuss the story with ProPublica, Maddow or CNN, he did issue a statement yesterday to which we promptly responded, noting that Ross did not "deny that he received significantly more than an arms-length fair-market price for the building."  Additionally, the Arkansas Democrat-Gazette published an article today (available on his Web site) quoting two pharmacy experts who say the assets were sold "well within the ballpark" of what similar assets would bring; neither expert has knowledge of this particular sale.

We will continue to follow this story as it develops.