For the administration's detainee policy, it's been two weeks full of revelations and upheavals.

Last week, the Supreme Court upset the apple cart by ruling that denying Guantanamo Bay prisoners the right to challenge their detention in civilian court was unconstitutional. And then McClatchy unveiled its investigative series into detention facilities in Guantanamo Bay and Afghanistan. And yesterday a Congressional panel released documents showing the role of high-level Pentagon officials and the CIA in developing the harsh interrogation techniques used at Gitmo. 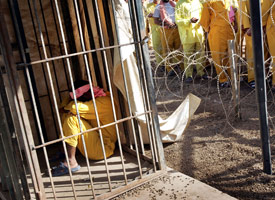 Today, it's a 130-page report by Physicians for Human Rights on the torture of detainees at Gitmo and Abu Ghraib in Iraq. Doctors and mental health professionals from the U.S.-based non-profit examined 11 former prisoners -- seven from Abu Ghraib in Iraq and four from Gitmo -- with intensive two-day long exams.

All 11 former detainees reported being subjected to:

•Stress positions, including being suspended for hours by the arms or tightly shackled for days.

•Prolonged isolation and hooding or blindfolding, a form of sensory deprivation.

•Extreme heat or cold. —Threats against themselves, their families or friends from interrogators or guards.

The report does not mince words about the result: "The evaluations provide evidence of violation of criminal laws prohibiting torture and of the commission of war crimes by U.S. personnel."