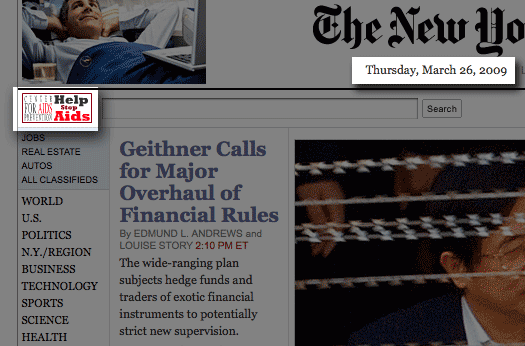 After publishing our inquiry into a shady AIDS charity, we asked the New York Times, whose Web site has been running prominent ads for the group, whether they’d drop the ad. Their answer? No.

"Should there be allegations of fraud against an advertiser, we would discontinue advertising, until the matter is resolved. At this time, we have no indication of that," wrote Steph Jespersen, the Times director of advertising acceptability, in an e-mail forwarded by a spokeswoman.

The Center for AIDS Prevention’s advertisement solicits donations for the charity and offers readers the chance to "Help Stop AIDS."

But the center has spread factually inaccurate, and potentially dangerous, health information through its Web site. The organization was also completely dormant for more than 20 years of its 22-year history, and it is unclear what, if any, charitable activities it’s been involved in since reopening in 2007. Moreover, the center’s proprietor is connected to a now-defunct herbal remedy company that offered an ineffective AIDS treatment, and its paper trail is filled with suspicious gaps. (Here’s our full story on the group.)

After reading our piece, Diane McNulty, the Times spokeswoman, told us, "It is important to note that we review the ad, not the organization. We do not read a book in order to accept advertising for it. Likewise, we do not validate statements of fact made by advocacy groups, or their Web sites. We do, of course, expect all advertisers to present information factually."

McNulty added in another e-mail that the Times "does consider the legitimacy of an organization," and the Center for AIDS Prevention was "legitimate… according to the rules governing 501(c)3 organizations. It is the business of the Attorney General of California to police these guidelines."

According to McNulty and the Times’ advertising acceptability guidelines, when complaints about advertisers arise, the newspaper asks disgruntled readers to put those grievances in writing, and it then forwards them to the advertiser.

One question we asked that hasn’t been answered: Is an advertisement that invites users to "Help Stop AIDS" by donating to an organization whose mission is education, but says birth control pills prevent the transmission of HIV, not misleading?