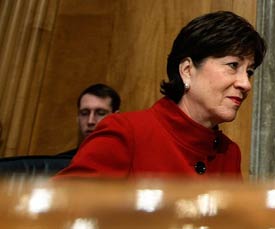 If youâre going to blow the whistle on mismanagement of projects funded by the new $787 billion stimulus package, youâd better not work for the federal government.

Government oversight groups praised Congress for including at least some provisions that would protect workers who speak up about problems at companies and state or local agencies that receive money as part of the stimulus.  But they were disappointed that the same protections did not apply to federal employees.

The original House and Senate bills also did not include protections for employees of the federal government.

But the House did pass a later amendment (pdf) from Chris Van Hollen (D-MD) and Todd Platts (R-PA) that would have extended the whistleblower protections to federal workers.  Senate conference members rejected the provision.

TPMmuckraker reported earlier this week that Sen. Susan Collins (R-ME), axed the provision. We tried to contact Sen. Collinsâ staff about this, but the voicemail boxes in most of her offices are full. Weâll keep trying.

But Sen. Collins actually has a long history of pushing for whistleblower protections. In 2005, Sen. Collins, along with Daniel Akaka (D-HI), introduced legislation to protect federal workers.

"Congress has consistently supported the principle that federal employees should not be subject to prior restraint or punishment from disclosing wrongdoing. This should give federal workers the piece (sic) of mind that if they speak out, they will be protected," said Sen. Collins said in a statement at that time.

Federal employees "are the ones that are in the best position to know how the funds are being spent," said Adam Miles, legislative representative for the Government Accountability Project. "If a federal auditor writes a hard-hitting memo and it touches a political nerve, he can be fired just for doing his job well."

Whistleblower provisions in the stimulus bill