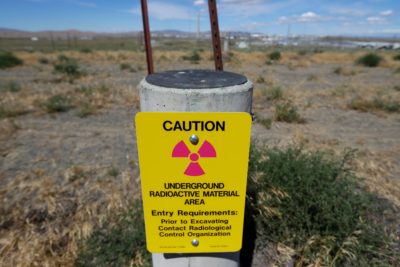 A new Department of Energy order that could be used to withhold information from a federal nuclear safety board and prevent the board from overseeing worker safety at nuclear facilities appears to violate longstanding provisions in the U.S. Atomic Energy Act, the board’s members said Tuesday.

Members of the Defense Nuclear Facilities Safety Board, both Democrats and Republicans, were united in their criticism of the Energy Department’s order, published in mid-May. It prevents the board from accessing sensitive information, imposes additional legal hurdles on board staff, and mandates that Energy Department officials speak “with one voice” when communicating with the board.

The Santa Fe New Mexican and ProPublica first reported on the order’s existence in July but the board called for a special hearing, saying its members had no formal input before the document was finalized.

At that hearing in Washington, D.C., Tuesday morning, the first of three on the topic, officials from the Energy Department and its National Nuclear Security Administration, which oversees the nation’s nuclear stockpile, said the changes were largely innocuous and were necessary to update a 17-year-old guidance manual.

“It certainly is not intended to harm” the relationship between the department and the board, said William (Ike) White, chief of staff and associate principal deputy administrator for the nuclear security administration. He said the changes are designed to ensure agency leaders “have ownership and accountability for the decisions they make.”

But board members said such statements were at odds with the language of the order, which outlines broad restrictions and could exclude thousands of Department of Energy workers from the board’s safety oversight.

“To me the primary question is, is [the order] consistent with the Atomic Energy Act?” asked acting board chairman Bruce Hamilton. “In my view, it is not.”

Board members also questioned whether the department was systematically changing its approach to nuclear safety, which agency officials denied.

Already, the order has been cited in denying the board access to information about safety studies related to explosives at the Pantex Plant in Texas, and about a worker’s complaint and the reclassification of explosive reactions at Los Alamos National Laboratory, a technical expert for the board said.

The five-member board, which currently has one vacancy, was formed in 1988 near the close of the Cold War, as the public and Congress began to question the lack of accountability at the Department of Energy and its predecessor agencies. Since the end of the Manhattan Project, the agencies had made their own rules and been largely self-regulating. Negligent safety practices contributed to cancer and other illnesses in nuclear workers exposed to radiation and toxic chemicals without proper protections, studies have shown.

Under the law, the board was granted wide access to information in order to make nuclear safety recommendations and add a layer of accountability and transparency to the Energy Department.

The Department of Energy has attempted to limit the safety board’s oversight function for more than a decade, but pressure has increased within the past year, advocates of the board say. Last summer, for example, the board’s then-chairman, who had been elevated into that role by the Trump administration, proposed dissolving the board entirely. A few months later, the National Nuclear Security Administration said the board should stop publishing weekly reports on issues at national laboratories because they were unflattering, citing media articles that referenced the reports. Neither one of those steps was implemented.

The Energy Department did not consult with the board, workers’ unions or residents who live near nuclear facilities before issuing the order, board members said. However, several private contractors who run national laboratories, including Los Alamos National Laboratory, were consulted, according to a memo referenced at the hearing.

Board member Joyce Connery said nuclear facilities are under stress because of aging buildings and staff turnover, even as they are called upon to greatly expand the production of nuclear weapons. This work is largely planned for New Mexico and South Carolina.

Under a new order from the Energy Department, a nuclear safety board will have to fight for information about and access to nuclear laboratories. In the past, the board has brought serious problems at those labs to light.

“This seems to be the perfect storm for accidents to happen and this is a time when we should be doubling down on safety,” she said.

Board members said the new order, which prevents board staff from speaking with officials at nuclear facilities without the express permission of energy officials, could stop them from getting time-sensitive information, particularly in an emergency. Under the guidelines, the board could be excluded from fact-finding meetings that occur after accidents. Board staff have previously sat in on such meetings to understand why issues occur, if problems are part of a pattern, and if lab contractors are following their own rules to correct mistakes.

The order could also cut the number of buildings subject to the board’s jurisdiction by 71 percent, removing certain lower-level facilities that handle highly dangerous chemical and nuclear materials but don’t present a risk to the public. An official from the nuclear security administration said board members would still have some access to the lower-level facilities. Among the facilities that would no longer be subject to board oversight is the Waste Isolation Pilot Plant in southern New Mexico, according to the board’s technical staff.

The board was the first to report that vehicles in the underground salt caverns at the Waste Isolation Pilot Plant were at risk of catching fire and should be fixed — several years before a vehicle fire caused workers to evacuate the mine on their hands and knees in 2014.

Matthew Moury, associate undersecretary for environment, health, safety and security, said workers are not defined as members of the public by the Department of Energy, so they don’t fall within the board’s central purview.

But board members said this limitation is unacceptable. Half of the board’s 41 technical reports to date have explicitly dealt with worker safety. In 2012, for example, the board recommended that the Energy secretary decontaminate a building at the Savannah River Site in South Carolina to prevent more than 1,000 workers from being exposed to radiation thousands of times beyond recommended annual limits if a fire were to occur there. This problem has still not been resolved to the board’s satisfaction.

Such recommendations could now be considered beyond the board’s scope.

“The board doesn’t pop out of a balloon with a recommendation,” said board member Jessie Hill Roberson. “The board works sometimes for years trying to encourage the action that it believes is necessary. … We issue recommendations when we don’t see action.”

Nuclear watchdogs also have called for the order to be frozen or rescinded.

Greg Mello, director of the Los Alamos Study Group, based in Albuquerque, said the order will weaken oversight of worker safety.

“This order is an existential danger to the board and to nuclear workers,” he said. “Hundreds of thousands of workers have been made sick making nuclear weapons, and if that is not enough proof that we need external oversight, I don’t know what is.”