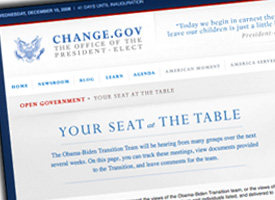 President-elect Barack Obama's transition team seems to be following through with its promise of transparency by posting documents from its meetings with industry and advocacy groups.

The documents are on a special section of the transition team Web site, change.gov, called Your Seat at the Table.

Already, dozens of documents are posted on the site from groups outlining policy recommendations for the new administration. There are some from industry groups, but a wide variety of interests have also come to the table. Here are a few examples:

No meeting specifics are posted, such as agendas or meeting video. But the team did post a snippet of video from its meeting with environmental groups to give visitors a sense of what the meetings are like.

The site also allows users to add their comments and documents to the site. Here are comments to the American Civil Liberties Union's recommendations.

A Dec. 5 memo (PDF) from John Podesta, chairman of the transition team, directed staff to inform groups that information they submit will be posted online. According to the memo, the policy "does not apply to non-public or classified information acquired from the Agency Review Process and internal memorandum."

Also, only notes from "official meetings," will be posted, which are defined as a "meeting with outside organizations or representatives of those organizations to which three or more outside participants attend."

We have asked the transition team whether meetings with government organizations will be posted as well. We'll update you when we get an answer.