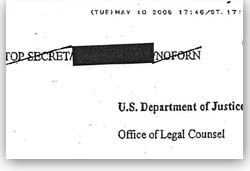 This afternoon the Obama administration released lightly redacted versions of four previously classified legal opinions from the Bush Justice Department approving CIA interrogation techniques now widely catalogued and condemned by many to have constituted torture. To continue withholding them in the face of a multi-year ACLU lawsuit to win their release, said President Barack Obama in a statement, "would only serve to deny facts that have been in the public domain for some time." Shortly after taking office, Obama ordered the abusive interrogation techniques abandoned.

Early press reports are focusing on the administration’s promise not to prosecute any CIA employee who reasonably relied on the memos to carry out interrogations. The government has also said it will defend employees in U.S. or foreign courts and before Congress.

But the administration was silent on its allegiance – or lack thereof – to the former administration lawyers, from the Office of Legal Counsel, who authored or signed off on the memos. It’s the lawyers who may face prosecution before a Spanish court and who’ve long been the subject of calls from U.S. civil liberties advocates for further investigation.

We asked about the administration’s stance on the conduct of those who wrote today’s released memos. Justice Department spokesperson Tracy Schmaler said that, because an internal Office of Professional Responsibility investigation is ongoing, "We can’t comment."

Today’s memos help flesh out the remarkable legal story behind the previous administration’s so-called war on terror – a story you can follow by exploring our chart of more than 50 related memos, listed by date, author and topic. Our continuing coverage of the battle to win release of some 30 still-secret memos can be found here.

The four newly public memos about interrogation are: