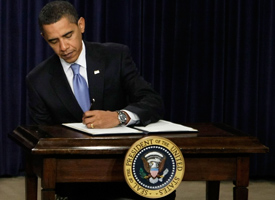 "The order suggests to me that the Obama administration might be much more circumspect in invoking exec privilege, both with respect to public disclosure and sharing information with Congress," top secrecy watchdog Steve Aftergood told us. "Lots of OLC opinions that have not been classified have been withheld from Congress and the public because of claims of privilege and if claims of privilege will be asserted in a more limited fashion, that would imply more increased release of OLC opinions."