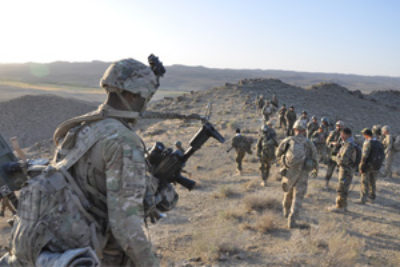 The most jaw-dropping element of President Donald Trump’s proposed budget for 2018 is still shaking the foundations of Washington. The Pentagon, the most profligate agency in all the land, would get another $52 billion to play with — and it is already one of the top spenders of taxpayer money. To fatten up the military coffers, pretty much everything else would take a drastic pay cut. Here’s the brutal visual by Quartz:

You can see pretty clearly what Americans would give up to finance Trump’s military spending, which includes another $2 billion for other non-Pentagon defense programs. Everyone from students to diplomats would take a hit. (Congress ultimately decides the budget, and Trump’s plan would require lawmakers to repeal the current spending caps — a contentious issue with opponents in even Trump’s own Republican party.) Although Trump wants the military to shrink its footprint abroad — essentially to do less — he nevertheless wants to give the Pentagon the extra cash to build up the number of, well, everything from troops to fighter jets.

No one questions the importance of the Pentagon’s mission, and there are many experts and lawmakers who not only agree with Trump’s idea to increase military spending but believe the Pentagon needs even more money. Almost 16 years of war has left the military with many recovery needs. Sen. John McCain argues that the military is “underfunded, undersized, and unready to confront threats to our national security.”

History shows, however, that there’s reason to be skeptical about what the Pentagon will do with the proposed largesse. The massive military industrial complex, with ample assistance, if not insistence, from Congress (which likes to buy unneeded toys), isn’t known for its efficiency with a dollar. More than one watchdog has noted that the Pentagon’s daily routine includes overpaying for parts — for instance, spending $264 for a helicopter part worth $8 — even when it already has a surplus of the supplies in military warehouses. The financial head smacking just gets worse the bigger the purchase. The F-35, anybody? That stealth fighter jet has gone over budget by $200 billion.

Waste like that could fully fund some of the programs on the chopping block for years. The roughly $148 million spent each year on the National Endowment for the Arts is but a rounding error for the Pentagon. So just how much of that $52 billion can we expect the Pentagon to fritter away, while other agencies starve? One way to imagine the possibilities is to look back at how money was wasted in a microcosm of military spending: the war in Afghanistan. Now, it’s not exactly the same. We’re talking about spending money in a combat zone — a considerable complicating factor — and the U.S. Agency for International Development and the State Department were involved in the mess, too.

Still, back in 2015, ProPublica was so gobsmacked by the staggering reports from the Special Inspector General for Afghanistan Reconstruction detailing the waste in individual projects that we decided to do the math. Adding up just those projects the IG had evaluated — a fraction of what was spent in the country — we found $17 billion of likely waste. Like the $25 million blown on a military headquarters that was never used. Not once. And commanders were pretty darn sure before they started that it wouldn’t be. Or the police building that was so poorly constructed it melted in the rain. Or the $8.4 billion spent on counter-narcotics programs that resulted in — drumroll — Afghanistan producing more heroin than it did before the war started.

Even when faced with such absurd examples, though, the idea of waste is still pretty abstract. So we came up with a game to answer the question: What does the waste mean to me? We wanted to show taxpayers in real terms what that money could have bought at home. With the game you can look at the $486 million worth of cargo planes that couldn’t fly, and figure out that the cash would have put 57,000 low-income children in preschool with enough money left over to treat thousands at mental health clinics. Or it could have gone towards building clinics and community centers for veterans.

So take the game for a spin while picturing how much waste might come from, say, Trump’s big-ticket wish — worth billions and likely to have plenty of its own F-35-like problems — to increase the Navy fleet from 272 ships to 350.