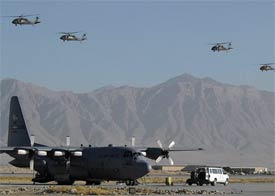 With President Obama having promised to shut down Guantanamo Bay’s notorious prison, four detainees at another U.S. detention center have made a curious request: They are asking a federal judge to grant them the same privileges enjoyed by Guantánamo inmates.

The Supreme Court decided last June Gitmo prisoners can challenge their detentions in court. But other detainees in U.S. custody – some of whom have been held nearly incommunicado for more than six years at Bagram Air Base in Afghanistan – aren’t so lucky.

Though most of Bagram’s prisoners were collared in battle, the four petitioners say they were captured like their counterparts at Guantánamo (abroad), detained like them (without charges) and allegedly treated like them (tortured). Human Rights Watch estimates that as many as 20 Bagram detainees are in that situation. Facing legal setbacks at Gitmo, the Bush administration argued that Bagram is different.

For one thing Bagram is in the middle of a war zone. "To provide alien enemy combatants detained in a theater of war the privilege of access to our civil courts is unthinkable, both legally and practically," Justice Department lawyers argued in a motion to dismiss one of the Bagram petitioners. The Pentagon said their release would threaten the security of U.S. and coalition troops in Afghanistan.

But during oral arguments on the case earlier this month, the judge, John D. Bates, asked prosecutors, "What evidence is there to believe they would return to the battlefield? They were not on the battlefield to begin with." Justice Department lawyers revealed the total number of Bagram detainees and the number captured outside of Afghanistan to Judge Bates last Friday, but the figures were redacted from public court documents. New reports put the total number of Bagram detainees at more than 600.

Amin Al Bakri, one of the Bagram detainees who sued for his day in court, never chose to visit the battlefield, say his lawyers, who were hired by his family and have never actually met or spoken directly to him because detainees are allowed few outside correspondences.

Al Bakri, a gem merchant, was seized during a short business trip to Bangkok in late 2002, sometime after checking out of his hotel and before his scheduled flight home to Yemen, one of Al Bakri’s lawyers told us. After cycling through a series of CIA "black sites" he turned up at Bagram, a former detainee who knew Al Bakri told his lawyers.

Judge Bates will also decide whether U.S. forces have "complete control" over Bagram. Guantánamo was once considered out of legal reach because it’s outside U.S. borders, but the Supreme Court ruled that since the military had "exclusive" control over the base, including an interminable lease with a vanquished Cuban government, it’s a de factoU.S. territory.

Not so in Bagram, the government argues, because the base is only a temporary setup to facilitate war efforts, and because people from other countries work there.

The base is shared with at least four other operations, including a NATO command and the air field, but "the detention facility itself is a completely U.S.-run facility," said Lt. Col. Mark Wright, a Pentagon spokesman. Lawyers for prisoners worry that the notion of shared operations around the base could be a façade, constructed to obscure legal access, and easily malleable to the U.S. government.

"Who decides what planes land and take off?" asked Eugene Fidell, a lawyer who directs the National Institute of Military Justice, and who is not involved in the Bagram petition. "Does Afghan customs play a role at the air base? Who guards the gate? Who decides who gets on or doesn’t get on the base? The flag is easy."

Comparing the Guantánamo detainees’ plight to their Bagram counterparts is "like an [M.C.] Escher drawing," Fidell said, evoking the tangle of staircases that don’t quite line up. "Something you’ve resolved in one case no longer applies in another because only one thing has changed."

Obama has been careful to hedge on his campaign pledge, recently suggesting it could take up to a year, or maybe even his whole first term. "The challenge," he said Sunday in an interview with ABC News George Stephanapoulos, "is that you have a bunch of folks that have been detained, many of whom who may be very dangerous who have not been put on trial or have not gone through some adjudication."

After a senior Pentagon official disclosed last week that she’d dropped charges against an alleged would-be 9/11 hijacker because she believes his "torture" precludes prosecution, that problem appeared more difficult to solve. Simply moving such prisoners to other facilities under the same status could be tempting, but it could do little to remedy the problems of policy that Guantánamo has come to represent.

"If the prisoners at Guantánamo are shipped to Bagram, closing Guantanamo would be meaningless," said Joanne Mariner, head of Human Rights Watch’s counter-terrorism program. There’s no indication that Guantánamo detainees have been rerouted to Bagram so far, she said. "Obama has promised to close Guantánamo, and I don’t think he’s going to do it meaninglessly."

However, if Obama does settle for a "symbolic break" from Guantánamo, the rush to shutter the prison could relegate detainees to places where they have even fewer rights, lawyers for detainees at both Guantánamo and Bagram say.

"The specter of Bagram is that it will be Guantánamo II," said Amanda Shanor, Al Bakri’s co-counsel. "I think Guantánamo’s just a place. The question is, ‘What will they do about the policy?’"