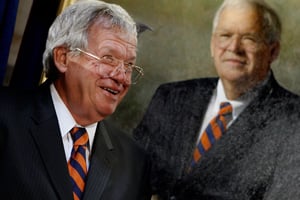 Former House Speaker Dennis Hastert is getting more than $40,000 a month in taxpayer money while working as a lobbyist, Politico's Jake Sherman and John Bresnahan report.

Under a federal statute enacted in 1975, Hastert -- a Republican who was speaker from 1999 to 2007 -- is entitled to a public allowance for five years to set up and run an office. That includes money for office space in Yorkville, Ill., three assistants each of whom make more than $100,000 a year, lease payments on a 2008 GMC Yukon and a satellite TV subscription.

But Hastert is also a lobbyist with Dickstein Shapiro and federal law prohibits him from using government-funded perks for his work as a lobbyist. Sherman and Bresnahan quote Kenneth Gross, a former general counsel for the Federal Election Commission, who says Hastert "has to be meticulous in his schedule to make sure there is no bleed from his publicly subsidized office into his private practice."

According to Steve Ellis, vice president of Taxpayers for Common Sense, it's hard to tell whether Hastert is abiding by that rule, because his spending isn't clear and transparent.