Republicans are blocking a bill that would force the disclosure of donors to President Bush’s library, according to Democrats.

Yesterday we reported that the White House and the president’s library foundation did not respond to  questions about whether there would be any disclosure of donors. We asked after a lobbyist was caught on tape suggesting that the former president of Kyrgyzstan make a hefty contribution to the library as a way to help procure a meeting with senior administration officials. 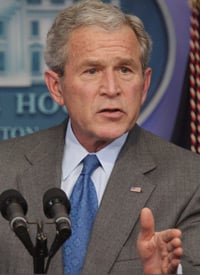 Fundraising for presidential libraries is unregulated, and has proven controversial in the past, especially for former President Clinton, who still hasn’t released the names of all his foundation’s donors.

Since last year, a bill has been stalled in the Senate that would require disclosure of major donors to presidential libraries. The bill, sponsored by Rep. Henry Waxman (D-CA), passed the House with only 34 Republicans voting against it. But the Senate has proven a higher hurdle.

The bill would require the disclosure of contributions to the presidential libraries of all living presidents, current and former, but would not require that donations made before the bill takes effect be disclosed.

“Republicans have a hold on it because Bush is opposed,” said Stephen Krupin, a spokesman for Senate Majority Leader Harry Reid (D-NV).

The White House and Senate Minority Leader Mitch McConnell’s (R-KY) office did not reply to requests for comment.

The bill cleared the Senate Homeland Security and Governmental Affairs Committee with bipartisan support in August of 2007.

But when Democrats sought to pass the bill by unanimous consent in February, Sen. Ted Stevens (R-AK) objected unless it included an amendment that made it applicable only to future presidents. "I have always supported transparency in these matters," Stevens said on the Senate floor, but "I do not believe it is fair to change the rules" on the Bush administration. "Changing them now would put a greater burden on them than on any other past administration which already finished collected the majority of donations for their libraries."

Stevens spokesman Steve Wackowski said Stevens is still blocking passage of the bill, because he has not been allowed to offer his amendment.

Update: Late today, Rep. Waxman told us via a statement: "This is one of a series of open government bills currently stalled in the Senate.  We are working with the Senate and hope that the legislation will move expeditiously and be enacted into law."

How We Report on Pain, Death and Trauma Without Losing Our Humanity

A Boy With an Autoimmune Disease Was Ready to Learn in Person. Then His State Banned Mask Mandates.