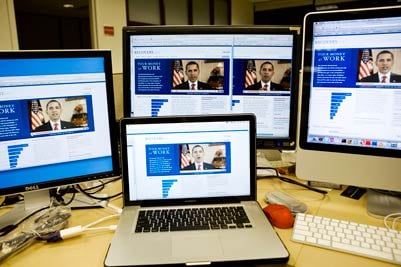 For a federal government that can sometimes take eight months to simply acknowledge an open records request, a Web site that lists every project funded by the economic stimulus plan sounds like a bold adventure in transparency.

The Web site, Recovery.gov, went live yesterday and there are a few features worth noting.

At the bottom of the homepage is a timeline of what happens next. For example, tomorrow, federal agencies will begin reporting formula grants to states and other agencies. On March 3, the public should get its first peek at some of the projects that will be funded.

Above that is a very general breakdown of how the money is going to be spent. But thereâs only eight categories, far less detail than the charts provided by the New York Times, the Wall Street Journalor, ahem, ProPublica.

Another feature worth noting is a U.S. map that shows the numbers of jobs the White House estimates will be created and saved in each state as a result of the stimulus. (As weâve been reporting, those job estimates involve some guesswork.)

The Obama administration promises much more for John Q. Public or Joe the Plumber, or whichever everyman is hip these days.

"The important decision about where taxpayer dollars are invested will be yours to scrutinize," President Obama says in his welcome video. "And once the money starts to go out to build new roads, modernize schools and create new jobs, youâll be able to see how, when and where it is spent."

One guide is USASpending.gov, a 2-year-old government Web site that compiles data on all federal contracts. The site was created by a bill President Obama sponsored (with Sen. Tom Coburn, R-Okla.) when he was in the Senate.