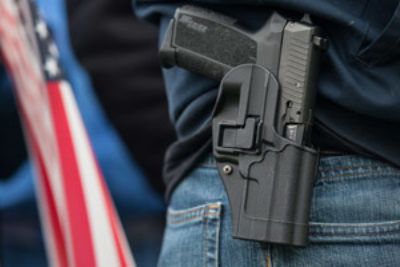 Update (12/19): This post has been updated to reflect recent developments in Michigan.

Friday’s deadly rampage at a Connecticut elementary school marked the 13th mass shooting in the United States this year. Among the 11 deadliest shootings in U.S. history, more than half took place in the last five years. During the same period, states have often relaxed their gun laws, making it easier for individuals to obtain guns, extending the places where concealed guns are permitted, or giving gun owners more robust protections.

We take a closer look at some of the more striking measures:

A March 2012 Colorado Supreme Court decision held that the University of Colorado could not ban students and employees with state-issued concealed weapon permits from carrying guns on campus. The decision overturned the university’s long-standing gun ban. While school policy prohibits guns at ticketed athletic and cultural events, Boulder and Colorado Springs’ campuses now designate dorms for permit-carrying students. (Guns are still banned in other dorms). “Not a single student has asked to live where guns are allowed,” the Denver Post reported last month.

In September 2011, the Oregon Court of Appeals issued a similar ruling, allowing guns on campuses throughout the Oregon University system.

Wisconsin passed legislation in 2011 allowing college students in the University of Wisconsin school system to bring a concealed weapon on campus grounds, parking lots and “other spaces that aren’t enclosed,” according to the Wisconsin State Journal. The school can prohibit guns in buildings, but only if signs are posted at each entrance.

A law passed by the Mississippi State Legislature in 2011 broadly extended the places where concealed weapons are allowed, including college campuses, secondary schools, courthouses, polling locations, churches, bars and passenger terminals of an airport – places previously off-limits. This year, the University of Mississippi, which previously required students to leave guns in their vehicles, began allowing students to bring concealed weapons on campus, provided they have a concealed weapons permit and take an 8-hour training course.

Utah grants the least discretion: Since 2004, the state has prohibited any public college or university from banning concealed weapons, as campuses are considered state property.

2. Some states now allow you to bring guns into daycare centers, churches, and even “gun-free zones”

Last week, the Michigan Legislature passed a law that would allow concealed weapons in current “gun-free” zones such as schools, day care centers, bars, churches, hospitals and stadiums. Gun owners are required to receive eight hours of extra training before bringing guns into these places. The bill, which has yet to be signed into law, gives private business owners discretion to ban firearms on their property. On Tuesday, Michigan Gov. Rick Snyder vetoed the legislation since it lacked the same opt-out provision for non-private institutions like schools.

While Michigan’s legislation has gained attention given its timing to Friday’s shooting, it’s far from the only law of its kind. As we’ve already noted, Mississippi has also expanded the list of permissible concealed carry locations.

Elsewhere, loaded guns in bars are now allowed in Tennessee, Arizona, Georgia, Virginia and Ohio. Georgia lawmakers introduced legislation earlier this year that would expand the list of places where you can bring in a concealed weapon, proposing to allow them in colleges, places of worship and polling places.

3. You don't have to be 18 years old to lawfully purchase, or be sober to lawfully use, a gun in some states

In Missouri, it’s no longer a crime for an intoxicated person to handle or fire a gun, so long as they were acting in self-defense.

Federal law prohibits licensed firearms dealers from selling a shotgun or rifle to anyone under 18, or handguns to anyone under 21. Still, some states impose minimum age limits that go below these federal limits.

4. Eight states have (symbolically) asserted their freedom to be exempt from federal gun regulation

Current federal gun laws set baseline standards regarding the sale and possession of guns. For instance, the Brady Handgun Violence Prevention Act requires licensed gun dealers to perform background checks on prospective gun purchasers. And agents with the Bureau of Alcohol, Tobacco, Firearms and Explosives can conduct warrantless inspections of any licensed gun dealer – although, as we’ve previously noted, its authority has been hamstrung in recent years.

The Montana gun activist behind the state’s legislation, whom the Wall Street Journal profiled, explained he felt he should be “free from federal laws requiring him to record transactions, pay license fees and open his business to government inspectors.”

The states’ moves are basically symbolic. The states are still following the few federal rules that exist.

But that could change. Montana Shooting Sports Association and Second Amendment Foundation have filed a lawsuit in federal court to enforce the law.

5. Some states want to make it a crime for doctors and employers to ask about your gun

In 2011, Florida became the first state to enact a law prohibiting any health care professional from asking patients whether they own guns or store them safely. A federal judge later struck down the law based on free speech grounds, stating that a physician who “counsels a patient on firearm safety…does not affect or interfere with the patient’s right to continue to own, possess or use firearms.”

Other states have followed in Florida’s footsteps: Alabama and North Carolina have introduced similar legislation in the last year.

In 2010, Indiana made it easier for people to store guns in their vehicles in a workplace parking lot. A year later, Indiana passed a law allowing job applicants and current employees to sue a private or public employer for requiring disclosure of firearm ownership or use.

6. Nearly half of states have adopted some type of “Stand Your Ground,” or “Shoot First” law

Florida and 24 other states have enacted “Stand Your Ground” laws that expand a person’s right to self-defense. Under these laws, individuals no longer have a duty to retreat to avoid confrontation in any place he or she has a right to be.

Florida was the first state to introduce such a law in 2005 – and many other states have followed suit. The law came into national spotlight when an unarmed 17-year-old teen, Trayvon Martin, was shot and killed by a neighborhood watch guard in Florida earlier this year. The shooter, George Zimmerman, was not initially charged with a crime; he has since been charged with second-degree murder and awaits trial.

7. A few states make it easy for even violent felons to get their gun rights restored

The New York Times conducted an extensive investigation into this issue last year. The story reports that in 11 states, nonviolent felons have automatic restoration of their gun rights while a handful of other states allow felons convicted of violent crimes to regain their gun rights.

In Minnesota, for instance, violent felons can petition a court to regain their gun rights by showing “good cause.” There is no waiting period. In Ohio, a violent felon need only demonstrate to a judge that he or she has “led a law-abiding life” since they’ve left prison. In Washington State, felons can get their gun rights restored as long as they haven’t been convicted of any new crimes in five years. Under Washington State’s Hard Times for Armed Crimes Act, judges actually have no discretion to deny restoration based on a felon’s character or mental health.

Felons in other states have other ways to get their guns back: Georgia and Nebraska have granted a high number of pardons to restore felons’ right to bear arms even for those convicted of crimes like voluntary manslaughter or armed robbery.

And Montana makes it possible for felons to get their gun rights restored as long as they didn’t use a dangerous weapon in the commission of their crime.