This article was produced in partnership with the The Southern Illinoisan, a member of ProPublica’s Local Reporting Network in 2018.

It was the kind of promise that low-income residents across the country often hear. But in this case, it seemed different. The company and its founder, Anthony Fusco, were the subject of numerous newspaper articles that hailed their work buying buildings like this one, renegotiating contracts with the U.S. Department of Housing and Urban Development, and saving more than 2,000 apartment units in the process. A New York Times headline referred to one such building as a “Cinderella.”

“I was very hopeful,” said Samuel Douglas, a longtime resident of the Barbara Jean Wright Courts apartment complex in the Near West Side.

Shortly after acquiring Barbara Jean Wright Courts in 1999, CCDC spent about $6.5 million renovating it, paid in large part by tax-exempt bonds and proceeds from federal low-income housing tax credits, the primary source of funding in the U.S. for affordable housing development.

Fusco, who remains the company’s president, said the renovation work included new roofs, new paint and carpet, upgraded kitchens, and the installation of windows and skylights in common areas and stairwells, among other improvements.

But 20 years later, the property has deteriorated and is in need of a multimillion-dollar renovation. Tenants like Douglas say they feel let down.

Barbara Jean Wright Courts is one of about 820 apartment complexes in Illinois that have entered into contracts with HUD to provide housing to low-income families. The buildings operate much like public housing, except that their owners are private for-profit and nonprofit landlords.

Nationally, more than 1.3 million households rely on these apartments. They can be found in cities throughout Illinois, from Carbondale to Chicago.

But as Barbara Jean Wright Courts illustrates, many of these aging buildings face financial and management challenges much like their public housing counterparts. 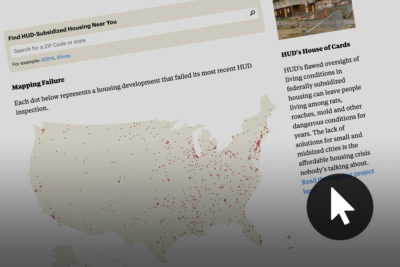 Congress put a halt to HUD issuing new project-based Section 8 contracts like the one HUD holds with Barbara Jean Wright Courts in 1983, about a decade after the program began. At that point, federal lawmakers decided to devote more funding to portable vouchers that subsidize rental costs in the private market, rather than tying subsidies to specific buildings. But it can be a challenge for voucher holders to find landlords who will accept them.

Privately owned and managed buildings receiving HUD subsidies became even more critical in Chicago after the city began tearing down high-rise public housing complexes like the notorious Cabrini-Green and Robert Taylor homes in the 1990s. Chicago is a high-cost city with diminished rental options for people in poverty.

The problems that plagued Chicago’s large public housing complexes haven’t gone away; they have simply shifted, according to Philip DeVon, an eviction prevention specialist with the Metropolitan Tenants Organization, an advocacy organization that supports low-income families.

“It’s a false and misleading narrative that public housing doesn’t work and the private sector does it better,” he said. DeVon said these programs work when affordable apartments, regardless of ownership, are available in neighborhoods where residents can easily access transportation, grocery stores, medical care and good schools, and when adequate oversight and funding is provided to ensure they’re maintained properly.

Douglas, the vice president of the Barbara Jean Wright Courts’ tenant association, and other residents say their building suffers from leaky ceilings, mold, infestation, shoddy repairs and a landlord who is slow to respond to their concerns.

Corine Busch, another resident, says the tap water that runs out of her faucets is discolored. She boils it before using it to cook, and she buys bottled water to drink. It’s been that way for at least a year, she said.

Johnson said the Barbara Jean Wright Courts is in an ideal location compared with other HUD-subsidized apartment complexes. It’s adjacent to the University of Illinois at Chicago campus and surrounded by gentrifying areas, including Little Italy just to the north, the West Loop to the northeast, Maxwell Street to the east and Pilsen to the south. Johnson said she fears where she’ll end up if she’s forced to find a new apartment with a voucher.

Fusco disagreed with the tenants’ assessment of the property, but he acknowledged that “due to the passage of time,” the property is in need of millions of dollars in repairs and renovations. Fusco said he’s been working for about three years to find a reputable buyer for this and other properties in his portfolio. “I’m 71 years old, and I’m not in a position” to refinance the property, he said.

CCDC plans to sell it for $1, with the caveat that it’s preserved as affordable housing. The buyer will assume about $16 million in debt and interest. “Just so you understand, I’m not in this for the money,” Fusco added.

Tenants say they had not been informed of Fusco’s plans. Johnson said tenants tried for months last year to set up a meeting with Fusco — to no avail.

The tenants said they also tried without success to get HUD’s attention. HUD’s multifamily office in Chicago, which oversees properties like this one, is led by Dan Burke, who worked for years with Fusco as his vice president at CCDC; he left the organization 11 years ago.

Leah Levinger, executive director of the Chicago Housing Initiative, sent an email to Burke in June 2018 asking for a meeting. Burke wrote back that he is “recused from matters regarding Barbara Jean Wright Courts Apartments” and directed communication to an employee who works under him. But Levinger said that two other HUD employees didn’t return multiple messages over the course of months to arrange a meeting, either. “I’ve been doing this for 15 years, and this is one of the worst buildings I’ve seen,” she said.

HUD spokesman Jereon Brown said that Burke recused himself in 2018 from meeting with tenants about property conditions “as an exercise of caution and in order to avoid the appearance of a conflict of interest,” though he wasn’t required to do so by law. (Burke declined to speak directly with The Southern Illinoisan.)

In response to questions about the property this fall, Brown said New York-based Jonathan Rose Companies has informed HUD that it plans to acquire Barbara Jean Wright Courts and invest up to $50,000 per unit in repairs. Brown, who left the agency this month, described the company as a high-performing entity that owns thousands of affordable housing units across the country. “There is no doubt, the property, which was last rehabbed in 2001, is in need of refreshing and repairs,” Brown said. “The sale of the property provides the infusion of funding to accomplish that.”

But relief is still a long way off. A closing has been delayed by the complexity of the deal.

The building’s finances are propped up by several layers of government programs, each with its own requirements.

About $6.9 million in debt on the property dates back to when the building was constructed in the early 1970s under a new federal program that provided incentives for private companies to build and manage housing for America’s poorest families. Fusco said the program set owners up to fail because it didn’t give them enough operating revenue to manage the buildings properly. In 1988, when CCDC was created, many properties nationally were facing foreclosure and were at risk of losing their affordability status. HUD agreed to suspend payments on its loan when CCDC purchased the property so that it could invest more money into renovations.

Today, only about 40% of the property’s 272 units are covered by a project-based Section 8 contract with HUD. Under this program, tenants pay about a third of their income toward rent costs, and HUD subsidizes the rest up to an established amount. The amount of rent CCDC can charge at the property’s other 166 units is also restricted because of the company’s use of low-income housing tax credits for the renovation work. That squeezes revenue.

Jonathan Rose Companies recently told tenants that it will likely be near the end of 2020 before the property changes hands, Levinger said.

Nathan Taft, a partner with Jonathan Rose Companies, said his company is committed to acquiring and renovating the property, and maintaining it as affordable housing. The firm has experience in overcoming complex deals like this one, he said. When the HUD-held loan is paid off, there is a potential to increase the subsidy amount the property receives from HUD, which would help support the renovation and shore up its financial condition, Taft said. 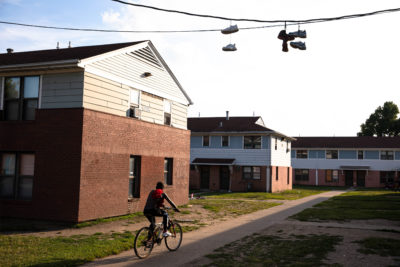 In a report this month, HUD’s Office of Inspector General sounded the alarm about owners taking on too much debt, resulting in deferred maintenance or the property’s inability to meet its financial obligations as revenue is siphoned off to pay it down.

Fusco maintains that the debt load on his property is typical for HUD-subsidized properties. It’s not ideal, he said, but a reality given that funding options are limited to maintain apartments that low-income families can afford.

“I’ve spent 30 years of my life trying to save those units,” he said. “I think we’ve overcome some tremendous obstacles to keep the properties viable, quality affordable housing. And I’m hoping to find a way to extend their useful life to a period past my stewardship.”