This article was produced in partnership with The Public’s Radio, which is a member of the ProPublica Local Reporting Network. It was co-published with the Boston Globe.

“His decades of experience as a first responder coupled with his recent experience operating a company that trains EMTs made him well qualified to serve on this board,” the governor’s spokeswoman, Jennifer Bogdan, said of Peterson in an email.

But left unsaid is that Peterson, a retired North Providence fire captain, also has a criminal history and has been disciplined by state health regulators. His company, meanwhile, has made misleading statements on its website about its professional accreditation and drew a warning last week from a national group following questions from The Public’s Radio.

Peterson’s appointment and the broader board restructuring comes amid a feud over state protocols around emergency medical services. The state firefighters unions and the Rhode Island League of Cities and Towns pushed back against efforts by state health officials and some doctors to restrict which first responders could insert breathing tubes in cardiac arrest patients. The Public’s Radio and ProPublica reported this month that 12 patients died from 2015 to this year after their breathing tubes were misplaced, pumping air into patients’ stomachs instead of their lungs.

The firefighters and municipal leaders successfully pushed for legislation signed in July by Raimondo that ousted Health Department officials from the state Ambulance Service Coordinating Advisory Board.

Aside from Peterson, Raimondo also appointed Johnston Mayor Joseph M. Polisena, who was highly critical of efforts to restrict the use of intubations.

It isn’t clear how Peterson was chosen for the advisory board. Raimondo’s office received no letters recommending him, Bogdan, the governor’s spokeswoman, said in an email. Peterson simply called the office to express his interest in the board seat, Bogdan said. He was selected over a pediatric emergency medicine doctor who also asked to be appointed.

Peterson is a licensed EMT-Cardiac. Prior to forming his own company in 2006, the state Health Department placed Peterson’s EMT-Cardiac license on probation for a year after he was criminally charged with obstructing a police officer and filing a false report claiming his Lexus sedan had been stolen even though it had not, The Providence Journal reported.

Peterson pleaded no-contest to the obstruction charge and the case was later expunged, said Christopher Maselli, a Providence lawyer who represented Peterson.

Three years earlier, Peterson had pleaded no-contest to simple assault after he allegedly cut off a man with his car, exchanged angry words with the other driver and then broadcast a call for help over his police-band radio, The Journal reported. When police responded to his broadcast, they found both cars stopped at an intersection and the two men “wrestling” in the street. That case also has been expunged, Maselli said.

Then, in 2010, Peterson was charged with second-degree child abuse against his then 15-year-old son, The Journal and ABC6 News reported. The Journal reported that Peterson’s son claimed his father punched him in the stomach and face and kicked him in the buttocks because he was “pretty disappointed” in him for failing his algebra class.

There is no court record of the resolution of this case. Peterson said the charge was reduced to a misdemeanor and later expunged.

(Rhode Island law allows people convicted of a misdemeanor to file a motion for the expungement of records five years after completing their sentence.)

“I’m not proud of these things at all,” Peterson said in an interview, “but they happen for a lot of different reasons.” Among the reasons in his case, he said, were “anger management issues,” alcohol abuse and PTSD, which, as firefighters, he said, “we all have ... unfortunately.”

Peterson said he got help through an employee assistance program that provides counseling and treatment for firefighters. Since then, Peterson said, he has “made it a mission ... to do the right things,” including becoming “more of a helpful, caring, loving father.” As for his past conduct, Peterson said, “I’m not that person anymore.”

Through his company, Peterson said, he is focused on helping others by teaching lifesaving skills and providing job training for people who are unemployed or underemployed. Two of the people who graduated this month from his jobs program, he said, are single mothers who have been homeless.

Peterson was selected for the ambulance advisory board over Dr. Tanya Sutcliffe, a pediatric emergency medicine physician and assistant professor at Brown University’s medical school, who wrote to Raimondo in April requesting the appointment.

When Sutcliffe learned in September that Peterson was appointed to the board, she expressed her concern to Joseph Masino, the governor’s manager of boards and commissions: “I respect not being chosen,” she wrote in an email obtained by The Public’s Radio, “but if an ambulance advisory board member who votes on changes that may effect the best interest of pediatric patients in RI has been charged with harming a child in the past, I cannot and will not remain silent as a pediatric physician, a mother, and a Rhode Island resident.” 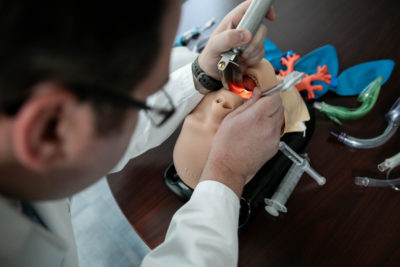 Sutcliffe did not respond to a request for comment.

John H. Potvin, a firefighter captain in East Providence who chairs the Ambulance Service Coordinating Advisory Board, said he didn’t know the details of Peterson’s past infractions. But in this case, he said, Peterson is filling a seat designated for a member of the public, not one reserved for a health care provider. “So really the only requirement is that he’s a member of the public….regardless of standing,” Potvin said.

Peterson’s company also has received significant financial support from the state. To date, the company has received a total of $953,049 from state job training and workforce development programs, of which about 20% came from federal sources, Angelika Pellegrino, a spokeswoman for the Rhode Island Department of Labor and Training, said in an email.

Peterson’s company was the lowest bidder for another three-year lease for the police and fire academies this year, but the City Council has not awarded the contract.

More recently, Peterson has also taken steps to revise representations made by his company on its website after questions from The Public’s Radio. The website had featured the name and an old logo of the National Registry of EMTs, a nonprofit that certifies EMTs and paramedics who pass its tests. Peterson is not, nor has he ever been, nationally certified, said the National Registry’s chief operating officer, Donnie Woodyard Jr.

“Not only are they using our patches without permission, they’re actually using patches for a level that was taken out of training about a decade ago,” Woodyard said in an interview this month, adding that he planned to send Peterson’s company a cease-and-desist letter. As of Tuesday, the images had been removed.

Peterson’s company also operates without the national accreditation needed for its graduates to qualify to take the paramedic licensing exam, despite claims on its website that its courses were “certified” by the Committee on Accreditation for the EMS Professions, or CoAEMSP. (CoAEMSP does not “certify” paramedics programs, Gordon A. Kokx, the organization’s associate director, said in an email.) When asked about the claim on Tuesday, Peterson sounded surprised. “If we’re misleading people, I want to know and I’ll have it changed.”

That wording has since been removed.