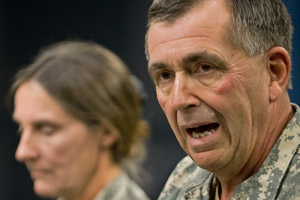 "We are taking this extremely seriously," Chiarelli said Wednesday in response to an investigation by National Public Radio and ProPublica which found the military is failing to identify and treat soldiers with so-called mild traumatic brain injuries. "There's no reason for us not to try to diagnose it."

Mild traumatic brain injuries, which are frequently caused by roadside blasts, leave no visible scars, but can cause lingering mental and physical damage. Officially, military figures show that about 115,000 soldiers have suffered mild traumatic brain injury since 2002. But we talked to military doctors and reviewed unpublished studies that suggest far more soldiers could have sustained such wounds. While most recovery quickly, estimates suggest that between 5 percent to 15 percent go on to develop cognitive problems.

In an interview on the NPR program "Talk of the Nation," Chiarelli said that the military had diagnosed thousands of soldiers with traumatic brain injuries, also called TBIs. But he said it was important to focus not only on TBI. Many soldiers are also suffering from post-traumatic stress, or PTS, a debilitating psychological wound that can be caused by the intense terror of being involved in a roadside blast.

Many soldiers suffer from both conditions at the same time, making it important to treat the symptoms, whatever the cause. He said the military was diagnosing and treating soldiers suffering from both wounds, which he described as the signature injuries of the wars.

"It's time we realize that TBI and PTS are real injuries," Chiarelli told Talk of the Nation host Neal Conan. "We've got to ensure our soldiers get the care that they need."

Chiarelli noted that the military is planning to implement a policy where soldiers exposed to nearby blasts will be evaluated by two separate tests to determine whether they have suffered a concussion before being returned to the battlefield. He said that doctors have advised him that soldiers at most risk of developing long-term problems suffer from multiple mild traumatic brain injuries, which are also called concussions.

"If either one of the exams in that 24-hour period indicates the individual had a concussion, they are pulled out of the fight until the concussion has an opportunity to heal," Chiarelli said. "The key here is not to have that second concussion while the brain has not recovered from the first."

But the NPR and ProPublica investigation found major problems with the two primary screening systems now used in the field. After a blast or blow to the head, soldiers take a paper-and-pencil exam called the MACE, or Military Acute Concussion Evaluation. In interviews, doctors and soldiers acknowledged that troops often manipulate the test to obtain a passing score and rejoin their comrades in battle.

A second computerized test used on the battlefield, known as the ANAM, or Automated Neuropsychological Assessment Metrics, failed to catch nearly half of all soldiers who had suffered a concussion, according to a recent unpublished study obtained by ProPublica and NPR. Lt. Gen. Eric Scoomaker, the Army's top medical official, recently testified in Congress that results from the test are no better than a "coin flip."

In recognition of the military's problems with screening, two Congressmen called for the military to implement legislation that would require veterans to receive individual, one-on-one evaluations for traumatic brain injuries and other battlefield illnesses.

Reps. Tom Rooney, R-Fla., and Michael E. McMahon, D-N.Y., cited the ProPublica and NPR investigation as further evidence of the need to pass the legislation, known as the Veterans Mental Health Screening and Assessment Act.

"Our troops and veterans deserve action to improve screening and detection of traumatic brain injuries," Rooney and McMahon said in a joint press release. "We hope the House of Representatives will move quickly to take up and pass this critical legislation."

Correction, June 9, 2010: This post originally said Gen. Peter Chiarelli was the Army's second in command. He is in fact the Army's vice chief of staff.