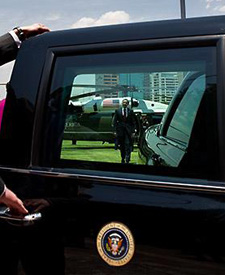 In November, we wrote about the transparency to-do list (PDF) that open-records advocates gave President Obama.

So three months after the inauguration, how has the administration done so far?

While the Obama administration is clearly more transparent than the previous administration, it still has a ways to go to accomplish what transparency groups recommended for its first 100 days, according to an assessment released today by OMB Watch.

On the plus side, President Obama hit the ground running on transparency issues:

The administration has made strides on other transparency issues, the assessment found, but its record so far is not spotless.

For example, the assessment knocked the administration for "maintaining the Bush administration's broad interpretation of executive branch power on the issue of state secrets." (Here's our comparison of the stances of Obama and former President Bush on national security cases.)

And consider the task of making government expenditures and contracting information more widely available. Recovery.gov was up and running in February, but many details about how stimulus money will be spent are still not there, or are in a format you'd have to be a rocket scientist to decipher.

The administration also has promised a Web site -- data.gov -- that would be a clearinghouse for government data. So far the site contains two words: "Coming soon."