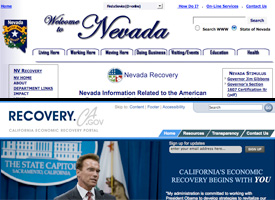 Two western states, Nevada and California, have unveiled Web sites to deliver stimulus transparency, but both were pretty preliminary when we reviewed them Monday afternoon. They've been added to our running list of all state transparency sites.

By contrast, American Samoa, a tiny U.S. island territory that's home to around 65,000 people, appears well-poised to bare its projects to public scrutiny. The island's recovery site doesn’t yet feature a list of projects sought by Gov. Togiola T. A. Tulafono's administration, but a handful of projects suggested by individuals and the government's own Port Administration are described in pretty good detail.

The Samoa News has the scoop!