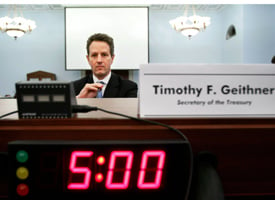 Treasury Secretary Tim Geithner is supposed to have 17 top deputies helping him run his massive department. But none have been confirmed.

"The secretary of the treasury is sitting there without a deputy, without any undersecretaries, without any, as far as I know, assistant secretaries responsible in substantive areas at a time of very severe crisis," is how President Barack Obama's economic adviser and former Fed chairman Paul Volcker put it a couple weeks ago. He called it a "shameful" state of affairs.

To hear Treasury officials tell it, there's no problem. Geithner hasn't been short on new plans or new billions for the financial sector in his first weeks on the job, they say. And he still has time for his morning workout.

"Any rumors of vetting problems or delays in the process are simply not true," a Treasury spokesman told this morning's Washington Post.

But if there aren't problems or delays in the vetting process, it's hard to figure just what's going on. Treasury officials whispered to the Post and New York Times, for example, that one nominee was nixed earlier this month because she'd overseen financial markets at the SEC during the boom and so might have a hard time of it before Congress. But, as the Post points out, it's unclear why that took so long to ascertain.

A number of reasons are offered for the holdup on staffing, chief among them Geithner's tax blunder, which has made the Obama administration's vetting machine that much more careful. The Post reports another hurdle: "[T]he agency is also facing difficulties recruiting financial experts because of rules that require senior Treasury officials to divest of their investments. With the markets plummeting, some candidates have been reluctant to sell their holdings and come to the department." The Obama administration's restrictions on lobbyists might also be making things tougher -- although that didn't stop Geithner from picking a former lobbyist for Goldman Sachs to be his chief of staff.

Of course, Geithner isn't literally alone. He apparently has about 50 senior advisers helping him out with key decisions. But the department seems awfully short on actual decision makers. And the ones that are there look "haggard," says the Times, and are forced to run about handling "wildly different projects."

When it comes to Senate confirmations, nothing seems to move very fast. So far, only a handful of nominations have been made.

Update: It's also worth noting the very lonely look to the Treasury Department's "Treasury Officials" page, where Geithner stands alone.