We've beenwriting today about the Memory Hole's post of 400 National Security Agency forms on their site. 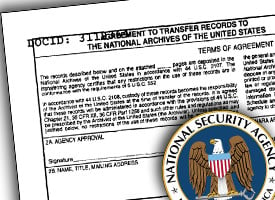 Most of the documents are bland, bureaucratic forms for things like getting security badges, how to apply for "carpool parking entitlement" and loads of forms to do with contracts.

Given that they're blank, most aren't particularly enlightening.

But there are some interesting snippets. For instance, a form titled "cryptographic access certification and termination" asks the applicant to agree to a "non-lifestyle, counterintelligence scope polygraph examination." And there's a paragraph in an "appointment affidavit" where the subject agrees not to participate in "any strike against the Government of the United States or any agency thereof" for the duration of their employment.

More interesting still are the longer forms, like this one (PDF), which shows the questions asked by NSA officials returning from overseas, including whether the official met "any foreign national who displayed an unusual ability to converse in English with you or otherwise showed undue interest in you."

The NSA confirmed the authenticity of all these documents.