A controversial Israeli organization that's representing the six men recently arrested in the recent revenge killing of a Palestinian teenager is receiving thousands of dollars in tax-deductible support from Americans. The group, called Honenu (which roughly translates to "pardon"), supports Israelis charged with or convicted of violence against Palestinians.

The group says it also provides "spiritual" and "financial" assistance to prisoners and their families. Among those Honenu has helped: Yigal Amir, assassin of Israeli Prime Minister Yitzhak Rabin; an Israeli convicted of murdering seven Palestinians at a bus stop; and an Israeli soldier convicted of manslaughter and obstruction of justice after shooting a British photographer in Gaza.

The tax-exempt donations do not appear to run afoul of U.S. law. But they do put U.S. taxpayers in the position of subsidizing aid to Israelis convicted of politically motivated violence.

Asked about the group's work, Honenu spokesman Eran Schwartz said the organization "provides much help to Israeli police, soldiers and citizens who are entitled, as are all people, to legal defense." Schwartz declined to answer our other questions, including about the group's financial support that goes beyond legal defense. (See their full statement below.) 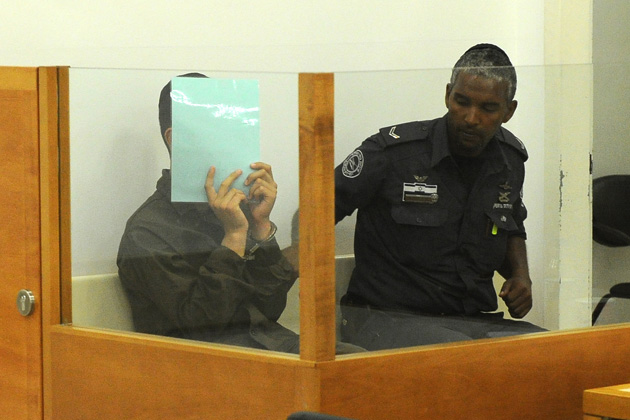 A suspect (L) connected to the death of Mohammed Abu Khdeir is seen covering his face at the court house in Petah Tikva, central Israel. (Xinhua/JINI)

The group, which was founded in 2001, uses an American nonprofit as conduit for donations. Honenu's website, which advertises that "your contribution is tax-deductible," says checks should be made out to "Central Fund of Israel," or CFI. As the New York Times detailed in 2010, the Central Fund of Israel serves as a "clearinghouse" for donations to hundreds of groups in Israel, some of them supporting settlements.

CFI has grown almost continuously since it was founded in 1979 by members of the Marcus family, who own a New York textile company.

Operating from Manhattan's garment district, CFI received about $16 million in 2012, according to the Fund's latest filing with the Internal Revenue Service. Jay Marcus, who now runs CFI, said donations in 2013 reached about $19 million.

In the Fund's filings with the IRS, it lists donations to Israeli groups as going to "social services, humanitarian aid, and aid to the poor."

Marcus confirmed in a phone call that his organization transfers donations to Honenu. "They are a legal aid society," he said.

Honenu's filing with the Israeli government shows the group received about $120,000 from CFI in 2012. The documents identify another $12,000 coming from "Honenu USA." A nonprofit organization with that name operated from Queens, New York and last filed a report to the Internal Revenue Service in 2010, stating it had received contributions of $33,000. It is not clear if Honenu USA is still active.

Marcus Owens, a lawyer who ran the IRS's nonprofit unit in the 1990s said such donations can fall into a tricky area: "While providing legal assistance to those accused of crimes is a long-standing charitable purpose (e.g. the American Civil Liberties Union), providing assistance to relatives of those convicted of crimes has been viewed by the US government as potentially encouraging further criminal action."

The State Department's recent annual report on terrorism included, for the first time, attacks by Israelis against Palestinians, citing a rise in "violent acts by extremist Jewish individuals and groups in retaliation for activity they deemed to be anti-settlement."

If you have experience with or information about American nonprofits supporting extremists in Israel, email Uri Blau or tweet him @uri_blau. Blau is an Israeli investigative journalist specialized in military and political affairs, corruption and transparency. He was a 2014 Nieman Fellow for Journalism at Harvard University.

As our article details, Honenu is an Israeli group that received tax-deductible donations from the United States and supports Israelis charged with or convicted of violence against Palestinians. We asked Honenu for comment prior to our article. This is their full response:

Honenu's response to article by Uri Blau. The reporter, Uri Blau was convicted of severe crimes of espionage against Israel which attests to his motives and his anti-Israel and anti-Semitic interests. To date, we have not heard him expressing regret for his criminal actions. Honenu provides much help to Israeli police, soldiers and citizens who are entitled, as are all people, to legal defense. We will not cooperate with a convicted criminal whose goal is to damage Israelis and Jews.

The author of our article, freelancer Uri Blau, was convicted in 2012 in Israel of holding classified military documents he received as a reporter. The International Press Institute condemned the case against Blau as "undermining press freedom in general and investigative journalism in particular" in Israel. Here is more on Blau's case and press freedoms in Israel.