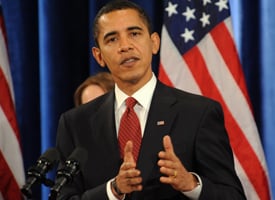 Will the new administration open the door on government as President-elect Barack Obama promised during his campaign? He's had some missteps along the way when it comes to transparency, but signs are good that U.S. citizens will know more about the goings on of their government than they have for the last eight years.

What we hear from the new president on Jan. 20 may very well set the tone for the next administration. In an opinion piece (requires free registration) in the Dec. 8 issue of Legal Times, the former director of the U.S. Department of Justice's Office of Information and Privacy, Daniel J. Metcalfe, provided suggested wording for the new president's inaugural address:

"And it is time for the excessive government secrecy of the past to give way to government transparency in the future -- so that all Americans can learn what their government is doing in their name and participate fully in our great democracy. Let us shine a bright light on government, in a variety of ways, and make this the most transparent administration in history." Any language along these lines, spoken on Day One of the Obama administration, would go a long, long way.

Metcalfe, who is now executive director of the Collaboration on Government Secrecy at American University's Washington College of Law, also urged that the new administration reverse the Freedom of Information memo issued by John Ashcroft in 2001 telling staff that they would be supported in any decisions to withhold information.

We'll know more once the new administration is in place, and we'll be following transparency issues -- good and bad -- as Mr. Obama and his staff get to work.