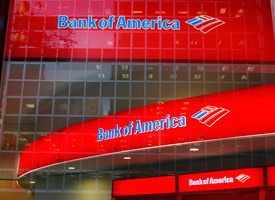 There's a bit of a disconnect. As soon as today, the Senate will be voting on whether to release the second $350 billion of bailout money to the incoming administration. Meanwhile, the morning papers bring us news that in December, the Treasury Department had already promised Bank of America billions of that same money to help it consolidate its merger with Merrill Lynch.

That cash will come from the pot of money Congress is currently debating whether to release. As we said before, despite all the Obama team's wooing and lawmakers' skepticism, it's pretty much a sure thing that next week the new administration will have the money in hand.

The details of the BofA deal have yet to be hammered out and are expected to be announced next week. All we know now is that the government will pony up billions to help the megabank cover Merrill's losses from toxic assets. How many billions isn't yet clear. But the Wall Street Journal reports that the arrangement will probably look something like Citigroup's November deal, where the Treasury Department invested $20 billion and then teamed up with the Federal Reserve and FDIC to backstop Citi's losses on a $306 billion pool of troubled assets.

By our count, the Treasury Department has already committed $358.4 billion of the bailout money, which means that together with the BofA deal, a significant chunk of the second half of the TARP money will have already been set aside by next week.

How did this happen? The first thing the Treasury did with the bailout money was announce a $250 billion Capital Purchase Program to capitalize the nation's banks. Most of the financial institutions on our running tally of TARP participants have received money through that program, which Treasury says is for "healthy" institutions. The Treasury has actually invested about $190 billion in banks so far, leaving about $60 billion yet to be committed. Since that money is not yet out the door, Treasury has seen fit to use it for other purposes, like the auto bailout. In reality, it's a stopgap. The government is counting on the second half of TARP money to come through and cover it: For instance, Treasury promised $4 billion in loans to General Motors on top of the $10.4 billion already lent on the condition that the second half of bailout funds get released.

Meanwhile, the Senate Republicans seem to be approaching the upcoming vote with some resignation, recognizing ultimate futility of their efforts. In fact, that resignation seems a crucial aspect of their opposition. As Sen. Robert Bennett (R-UT) tells the Washington Post: "The Republican base hates this. So a lot of people are saying why anger the base in the name of good policy when it's going to happen anyway?"