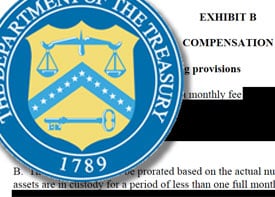 The U.S. Treasury Department has decided against publicly releasing key details of the contract it awarded Bank of New York Mellon to keep the books for the government’s purchase of toxic securities. In a publicly released copy of the contract, the Treasury blacked out how much it will pay the bank for its role in the government's $700 billion taxpayer-funded bailout.

The government’s justification for blacking out the monthly fees set in the publicly bid contract aren’t clear.

“It looks like a reflexive, ‘we don’t want to tell you,’” said Steven Aftergood, director of the Project on Government Secrecy at the Federation of American Scientists. “I just don’t see the rationale.”

Aftergood explained that the Freedom of Information Act allows the government to redact information for reasons including privacy and proprietary concerns, neither of which apparently applies in this case, he said.

A privacy exemption would allow the government to black out the names and salaries of specific Bank of New York Mellon employees, but not the bank’s fee. And a proprietary exemption applies while the contract is being competitively bid, a process that ended last week with the selection of the bank, the world's largest custodian of assets.

“If it were challenged, I believe they would eventually be compelled to reveal the information,” Aftergood said.

A Treasury spokesperson did not return our phone calls. But Treasury officials have previously told the Post that they will reveal the terms once other contracts related to the bailout have been negotiated.

The government released the redacted contract one day after a Treasury Department official touted the bailout plan’s transparency.

“Consistent with Congress' intent, we are committed to transparency and oversight in all aspects of the program,” said Neel Kashkari, the Treasury’s Interim Assistant Secretary for Financial Stability.

That same day, the Treasury compelled Bank of New York Mellon to take a $2 billion infusion of cash in exchange for preferred stock.

Government officials have called Bank of New York Mellon the “prime contractor” of the Treasury’s purchase program. Specifically, the bank will run the auctions used by the government to purchase distressed assets, then hold, track and value those securities. It also will keep track of executive compensation limits.

The bank beat out other big banks JPMorgan Chase and Northern Trust for the contract. In total, 70 firms vied for the deal.