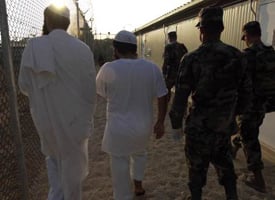 Government lawyers booted the term "enemy combatants" from the Washington vernacular last week. Now, the Justice Department is calling them "persons" whom the president "has the authority to detain."

Does the new phrase change anything more than terminology?

Not really. According to detainees' lawyers and other critics of detention policy, the new phrasing won't change the legal status of any of the prisoners. Though the changes may narrow the definition enough to affect the cases of a few detainees, no one we spoke to could think of an example.

In a court filing (PDF) responding to habeas corpus petitions by Gitmo detainees, government lawyers stated, "The president... has the authority to detain persons who were part of, or substantially supported, Taliban or al-Qaida forces or associated forces that are engaged in hostilities against the United States or its coalition partners, including any person who has committed a belligerent act, or has directly supported hostilities, in aid of such enemy forces." (The qualifier that support of terror groups must of have been "substantial" is the only real change, other than the term for terrorists.)

"They've completely jettisoned the phrase" -- enemy combatant -- "which is a symbolic improvement," Joanne Mariner, the director of Human Rights Watch’s terrorism and counterterrorism program, told us. "It admits that this doesn't fit the traditional paradigm," she said, but the filing still leans on wartime legal constructs to justify detentions that extend, without judicial review, until after fighting ends.

Indeed, the Obama administration's language is virtually the same as a 2004 definition of enemy combatants (PDF), originally drafted by the Department of Defense and used by a judge last October when he ruled on a landmark detainee case: "An enemy combatant is an individual who was part of or supporting Taliban or al Qaeda forces, or associated forces that are engaged in hostilities against the United States or its coalition partners. This includes any person who has committed a belligerent act or has directly supported hostilities in aid of enemy armed forces."

While advocates like Mariner are clearly disappointed that last week's filing failed to significantly narrow the definition that one Bush administration official argued could be stretched to include "a little old lady in Switzerland," others noted that the administration may have a good reason for making such an incremental change.

Federal District Court Judge John D. Bates "invited" the new administration to "refine" its "definition of 'enemy combatant'" before he ruled on a detainee case. On the same day, Obama's second in office, the new president had ordered a case-by-case review of the remaining Guantanamo detainees. The review was just getting under way by the time Bates' Feb. 10 deadline for redefining enemies came around. Obama's lawyers asked for more time, saying that enemy combatant status should be decided on a case-by-case basis, not through the application of a fixed definition.

Bates didn't buy their argument but extended the filing deadline until last Friday. "The definition of the central legal term 'enemy combatant' is not a moving target," Bates wrote in his order. The administration responded by dropping the disputed label but keeping most of its substance.

Kate Martin, the director of the Center for National Security Studies, foresees a possible conflict that could arise from narrowing the president's detention authority now. Critics of the Bush administration's detention policy have argued that many of the prisoners should have been charged in federal courts. In at least one case, Ali al-Marri's, administration officials have taken that position. If Obama's case-by-case reviewers determine that some prisoners are not enemy combatants, but could be charged in federal courts, changing the definition now could make bringing those charges impossible.

"Here's the timing dilemma they faced: If they wanted to narrow the definition, people who didn't fit that definition would have to be released tomorrow, even if they wanted to bring charges against those people," Martin explained. There may not have been enough time to get the charges in order since inauguration day, Martin speculates.

The memo (PDF) and another filing (PDF) by Attorney General Eric Holder suggest the government might indeed narrow the definition in the future. The administration will be "continuing intensive efforts to develop fully its prospective detention policies," Holder wrote (PDF) to the court. But this interim position -- "a holding pattern," according to some lawyers -- may raise more questions than it answers.

The filing is littered with ambiguous phrases like "private armed groups" and a "novel type of armed conflict" instead of "enemy combatants" and the "war on terror." The scrapping of martial lingo backs away from the Bush-era argument that asserts the commander in chief's right to lead the military independently from Congress. However, in a press release, the Justice Department explained that the latest definition still relies on the international laws of war as they apply to a 2001 congressional resolution that authorized the president to use military force.

"They're recognizing a right to detain," Madeline Morris, a Duke law professor who helped prepare a major brief to the Supreme Court on behalf of several detainees. "They're recognizing that that right is not governed by existing [laws of war]," in these cases, and that new rules will need to be articulated.

What they're not doing, so far, is showing their hand, our experts agree. "In every way, it's better than the old definition," said Mariner, the Human Rights Watch expert. "It's just not substantially different."