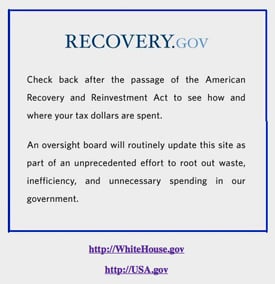 Will Recovery.gov -- the oversight Web site promised in the stimulus bill -- really give the public enough information about how their money is spent?

While the stimulus package passed by the House of Representatives earlier today lays out some public reporting requirements, it also leaves some wiggle room. And that's what worries some transparency advocates.

Any direct recipient of stimulus funds must give the agencies they've received funds from details about their projects. Then agencies, in turn, have to make those details public. But the bill doesn't clearly define how states and other recipients of the money will have to report information.

"These could be pdfs on recovery.gov and that wouldn't be the kind of transparency that we would urge there being," said Sean Moulton, director of federal information policy for OMB Watch. "We wanted a strong requirement on the government to establish a standard reporting system. So you're not getting 50 different structures."

When it comes to federal money, the stimulus legislation is more specific. The plans build on the structure of usaspending.gov, a site that already tracks federal money. Under the stimulus, more information must be posted, such as job creation and how money passed down from one entity to another is spent.

Another concern, Moulton said, is when states pay for projects or programs with a mix of stimulus funds and other money from their coffers.

"That's a tough nut to crack," he said. Moulton's OMB Watch's site fedspending.org was the model for the usaspending.gov. In some cases, states may lack the mechanism for segregating funds to that level.

President Barack Obama has pitched recovery.gov as a tool for citizens to track details about how money is spent in their communities. Stay tuned, we'll continue track how the site delivers.

Here are the transparency provisions: