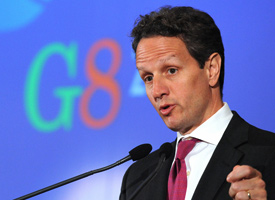 * Talk of inflation is up. A number of op-eds this weekend argue that as the economy appears to be leveling, the greater risk we face is double-digit inflation. A debate over our recession "exit strategy" is also emerging. At this weekend's G8 talks, Treasury Secretary Geithner insisted that, according to the New York Times, "it is still too early to begin scaling back government efforts to support the global financial system." Paul Krugman agrees. "Those demands (to call off the stimulus) should be ignored," he writes. "It's much too soon to give up on policies that have, at most, pulled us a few inches back from the edge of the abyss."

* A $25 increase in unemployment benefits has pushed some laid-off workers over the limit for food stamp eligibility, reports the Associated Press. It's unclear how many people have been impacted, but government officials claim that it's a marginal percentage of the unemployed.

* Vice President Biden yesterday on Meet the Press defended the administration's job creation estimates for the stimulus. As we've reported, those estimates involve a lot of guesswork.

* U.S. Education Secretary Arne Duncan continued his push to use the stimulus to push widespread educational reforms. Last week Duncan indicated that states that limit charter schools “will jeopardize their application” for additional federal stimulus grants. Yesterday, he told about 20 governors and education experts that the federal government will spend up to $350 million to help states design national standards for reading and math.

* U.S. Sen. Tom Coburn, R-Okla., will issue a report soon "that will raise questions about the validity of certain projects," reports the Los Angeles Times.

* Here's another job count figure to file: If the Kansas City area's transportation authority gets stimulus funding, it will layoff 25 workers instead of 50. In Paducah, Ky., $40 million to clean up a nuclear plant will produce 50 jobs through the U.S. Department of Energy.