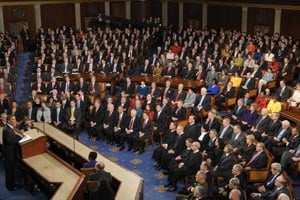 Congressmen like to travel -- in the past two years alone, members of the House and the Senate ran up 5,300 travel days, according to the Wall Street Journal -- and when they're abroad on official business, they get a chunk of spending money each day to cover basic costs. In Paris, for example, it's $178, in Tokyo it's $214, and in Kabul it's $28. When the trip ends, any unspent funds are supposed to be returned to the taxpayer, but as the Journalreports today, this doesn't always happen.

Instead, "lawmakers use the excess cash for shopping or to defray spouses' travel expenses," the Journal writes. "Sometimes they give it away; sometimes they pocket it. Many lawmakers said they didn't know the rules demand repayment."

Because there is no internal system of tracking these payments, it's unclear how much money has been disbursed, what it has been spent on and how much ought to have been returned. The Journal estimated that $375,000 to $625,000 had been given to House members in the past two years alone.

For their part, members of Congress from both political parties expressed little concern over the practice of not returning the cash. "You are all concerned about nickels and dimes, and I'm not," Rep. Alcee Hastings, a Florida Democrat, told the Journal, while former Rep. Tom Davis, a Virginia Republican, characterized the practice of using excess funds for shopping as "fairly standard."